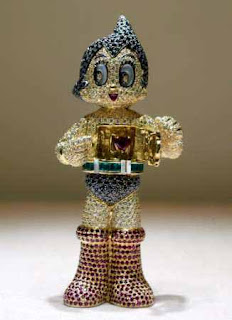 The Smithsonian Associates will feature the Japanese pop culture phenomena of manga (comics and printed cartoons) and anime in an all-day seminar on Saturday, April 21, 10 a.m. –5 p.m. as part of its cultural series “Japan WOW!” (March 31—June 9). The program “Manga to Anime: From Astro Boy to Spirited Away” will be held in the Meyer Auditorium at the Freer Gallery of Art (12th and Independence Avenue SW, DC, 20013). Tickets are $45 general admission, $30 for members, and $15 for students 18 years and under. For tickets and information, call (202) 357-3030 or visit
www.smithsonianassociates.org.

Manga and anime are now two of Japan’s biggest cultural exports—as evidenced by the popularity and record-breaking sales associated with the 2001 animated movie “Spirited Away.” In this seminar leading experts and industry veterans will explore the development of these interconnected art forms, commenting on the creative process, styles, characters and the effect these pop cultural creations have on United States markets and trends.

Leading the discussion on manga is Michael Uslan, “Batman” series producer and creative chief officer and producer of Comic Book Movies LLC. He is joined by artists/ directors Ryuhei Kitamura, Mitsuhisa Ishikawa, Kazuhiko Kato and Lotus representative Hiroshi Koizumi. Presenters Osamu Tezuka (creator of “Astro Boy”), Leiji Matsumoto and Masashi Kishimoto (creator of “Naruto”), use the works of Shotaro Ishinomori, as they look into manga’s history, the interaction of manga and modern culture, as well as its impact on the worlds of publishing, animation, and live action cinema with these talented artists of today’s manga creations.

In the afternoon, Dr. Susan Napier, professor of Japanese literature and culture at Tufts University, illuminates the world of anime. Considering it as a global cultural phenomenon, Napier expounds on the stories, characters and symbolism that define it.
The program “Manga to Anime: From Astro Boy to Spirited Away” is supported by the DC Anime Club. The Japan WOW! series is made possible by Amway Japan LTD, The Boeing Company, The Hay-Adams, Kikkoman, Mitsubishi International Corporation, Toyota and Washington Metropolitan Area Transit Authority (METRO); with additional support by All Nippon Airways (ANA), EYA, Embassy of Japan, Japan Information and Cultural Center, Japan Commerce Association of Washington, D.C., Japan Foundation New York, the Japan National Tourist Organization New York, Comic Book Movies, LLC, Lotus, Inc. and the Palomar Hotel.