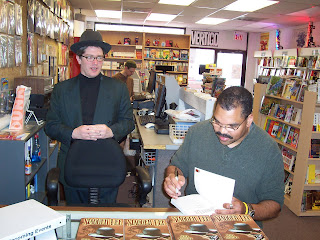 I'm late with this report , and I apologize. The signing for the Stagger Lee graphic novel was at Big Planet Comics in Bethesda on Wednesday, April 28, 2007. It started at 2:00 pm, unfortunately after the lunchtime new comics rush. Writer Derek McCulloch (the guy with the hat) and artist Shepherd Hendrix (the guy without the hat) were making an East Coast tour on their own dime, and had appeared on XM radio the day before, and were due at Barnes and Nobles in NYC the day after, followed by a college appearance before returning to California. More details can be found on McCulloch's blog. 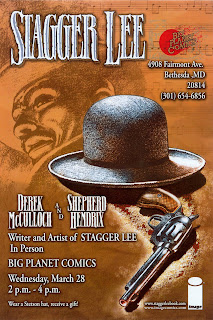 Things were slow when I arrived so I talked to them for a bit, and found out a few points of interest. McCulloch had the idea for the book, and showed the script to his old friend Hendrix at a party and Hendrix agreed to illustrate it. The book was about half-drawn when they pitched it to Image. They had been planning on self-publishing, but went with Image for its larger reach and abilities. 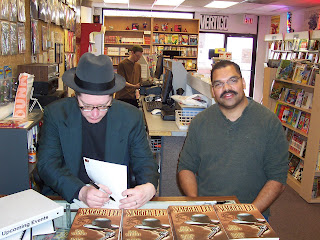 The book's been out for about a year and is a bit of a cross-over title, bringing out more music fans than superhero fans. I can attest to this because the 2nd customer had heard the radio show and drove down from Baltimore to buy 3 copies. 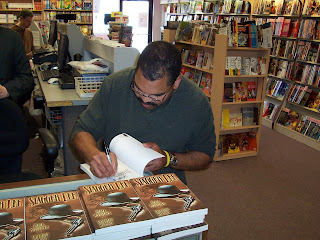 McCulloch wrote a full script and Hendrix drew from that. Hendrix had a couple of pieces of the original artwork with him as well as pieces from a couple of fantasy series that he's working on - some very nice stuff. The comic was a bit of a hobby for both of them until Image accepted it and then it became a job and had to be done much faster.

Well, that's all I can recall at the moment - I'll add anything I think of in later. I bought my copy and I encourage you all to give it a try. I imagine Joel's got extra signed copies at Big Planet because Image doubled the shipment he had requested. For more information, don't forget Scott Rosenberg's article - Cruel Old Stagolee Gets Graphic: The legendary tale of Stagger Lee gets a graphic treatment.
Posted by Mike Rhode at 9:01 PM