OT: Matt Wagner and the Shadow

I'm posting this article because Matt's experiences eerily parallel mine - the 1970's DC Comic, buying back issues (Archie's abysmal Radio Comics series in my case), the LP records (bought at a used book/record store in Bergenfield, NJ), the Steranko-covered Pyramid novels (bought at the Garden State Plaza before its steroidal growth)....

Straight from the Source: Matt Wagner Casts Light on The Shadow: Year One
PREVIEWSworld January 2013
http://www.previewsworld.com/Home/1/1/71/977?articleID=130678

Unlike Matt, I didn't become a comic book creator though. And he's absolutely spot-on when he says "The process of collecting comics used to involve a certain sense of mystery that's missing from today's fandom, where a quick internet search can hook you up with pretty much anything your budget can afford."  Late last year I decided to read the 1960s Belmont novels which set the Shadow in then-present day. After 30 years of looking for them and finding 3 or 4 in used bookstores, I completed my set in a few minutes on the internet.
Posted by Mike Rhode at 5:29 PM No comments: Links to this post

John K Snyder III and Matt Wagner visited the Library of Congress to see the original Spider-Man pages last week, before attending the Baltimore Comic-Con. Scoop has the story. You can see friend of ComicsDC, librarian Sara Duke, in the 2nd picture behind Matt.
Posted by Mike Rhode at 8:23 PM No comments: Links to this post 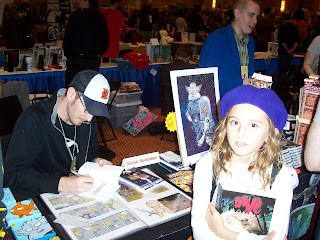 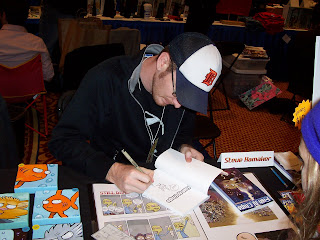 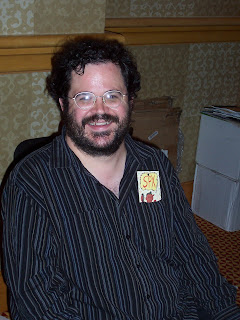 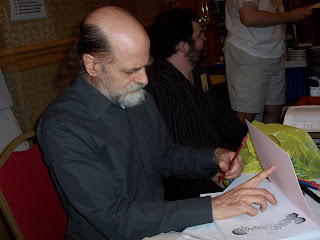 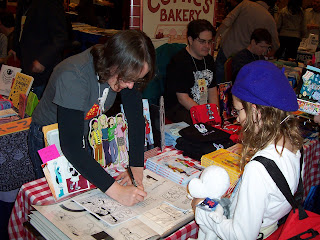 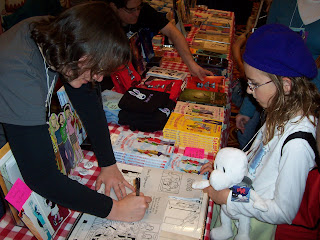 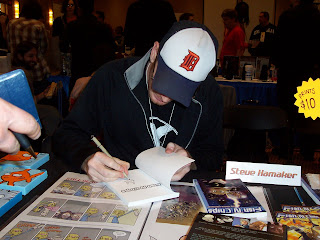 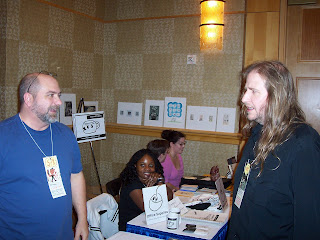 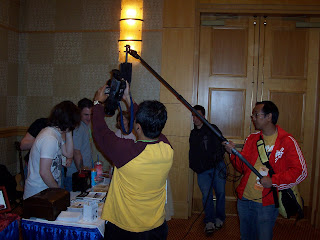 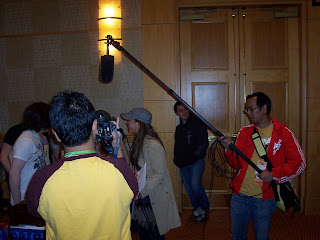 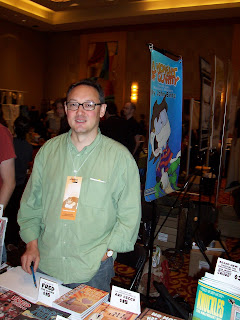 Roger Langridge, smiling even before I bought three pages of art from him 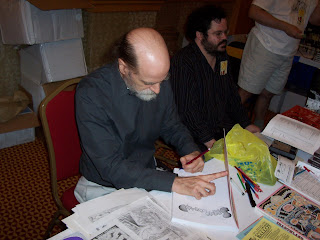 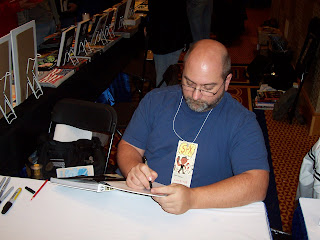 Matt Wagner drawing in his new book, The Art of Matt Wagner 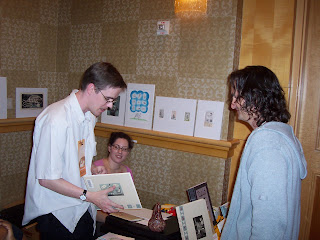 Jeff Smith congratulating and buying a book from an Ignatz nominee 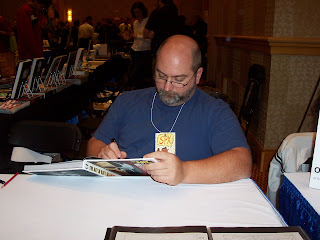 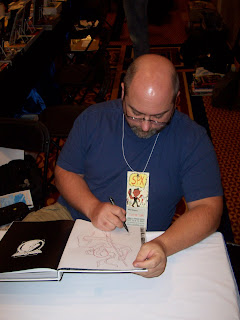 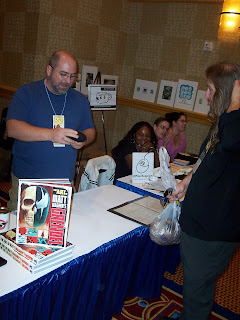 Here are some pictures I took - higher resolution ones can be downloaded at http://www.flickr.com/photos/42072348@N00/. If I spelled anyone's name wrong, please let me know.

Pictures by Bruce Guthrie should be appearing here soon - http://www.digitalphalanx.com/graphlib.nsf/Last_45?OpenView&count=-1
Posted by Mike Rhode at 10:46 PM 8 comments: Links to this post

I went to the Matt Wagner signing at Big Planet and bought a lot of books. I already had some of them in comics books, but it's easier to find compilations on the shelf. Matt was a real nice guy and I'm sure I'll get some photos from BP to post here. I've got some nice sketches in the books too!

How'd the other signings in town go?
Posted by Mike Rhode at 11:28 PM No comments: Links to this post 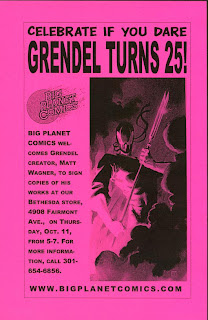 Exciting, isn't it?
Posted by Mike Rhode at 7:18 PM No comments: Links to this post


Oct 11 Meet Nick Abadzis. Join creator Nick Abadis and Big Planet Comics in celebrating his newest book “Laika”,the story of the Russian dog sent into orbit.
He will be signing the book at our College Park Store Thursday Oct. 11th from 5pm to 7pm.

And don’t forget the Small Press EXPO Oct. 12-13 at the Bethesda North Marriot. Come see Bill Griffith, Gilbert Hernandez, Jeff Smith and many many more. www.spxpo.com
Posted by Mike Rhode at 8:59 AM No comments: Links to this post

Big Planet owner Joel Pollack was complaining today that this blog's been too academic lately so I challenged him to give me some news. Here it is:

Matt Wagner will be at a 25th Anniversary of Grendel signing at Big Planet Bethesda on October 11, probably from 5-7 pm.

Nick Abadzis will be signing his new book, Laika, on the Russian space dog at Big Planet College Park on the same day. He'll also be making two appearances at the Air & Space Museum at some point.
Posted by Mike Rhode at 2:59 PM No comments: Links to this post

Big year at SPX! Lots of great names will be there.

Bethesda, Maryland; August 29, 2007 - The Small Press Expo (SPX), the preeminent showcase for the exhibition of independent comic books, graphic novels and alternative political cartoons, is proud to add Matt Wagner, Jeff Smith and Kim Deitch to the roster of guests for SPX 2007. This years SPX will be held October 12 and October 13 at The North Bethesda Marriott Convention Center in Bethesda, Maryland.

Matt Wagner is one of the pioneers of indie comics with his original creation of “Grendel”, which celebrates its 25th Anniversary this year. Matt also created, wrote and drew “Mage”, and has worked on a number of projects for both DC and Vertigo. His next installment of the Grendel saga, “Behold The Devil” is due to be released this November from Dark Horse.

Jeff Smith, is the creator of the celebrated epic “Bone”, which has over a half million copies in print and is now available in Italian, Spanish, German and many other foreign languages. Jeff recently completed his critically acclaimed reworking of the Golden Age hero Captain Marvel, “Shazaam! The Monster Society of Evil” for DC Comics. He has recently been named by Fantagraphics as the art designer in charge of the upcoming reprints of Walt Kelly’s classic, “Pogo”.

Kim Deitch will be at SPX to promote his well received latest graphic novel, “Alias The Cat” from Pantheon Books. Kim is one of the original “underground” cartoonists who redefined comics in the 1960’s and has also worked in the field of animation.

These creators are in addition to Bill Griffith, Gilbert Hernandez and Rutu Modan who were previously announced as guests at this years SPX.

Additional guests will be added over the next few weeks, please stay tuned for those announcements.

For further information on the artists or to request an interview, please contact Warren Bernard at webernard@spxpo.com.

SPX, a non-profit organization, brings together more than 300 artists and publishers to meet their readers, booksellers and distributors each year. Graphic novels, political cartoon books and alternative comics will all be on display and for sale by their authors and illustrators. A series of panel discussions will also be held of interest to readers, academicians and creators of graphic novels and political cartoons.

SPX culminates with the presentation of the 11th Annual Ignatz Awards for outstanding achievement in comics and cartooning. The Ignatz is the first Festival Prize in the US comic book industry, with winners chosen by balloting during the SPX.

As in previous years, all profits from the SPX will go to support the Comic Book Legal Defense Fund (CBLDF), protecting the First Amendment rights of comic book readers and professionals. For more information on the CBLDF, go to their website at
http://www.cbldf.org/.

Founded in 1994, SPX is North America's premier alternative comic-book festival. This annual event brings together comic creators, publishers and more than 2000 fans together to celebrate the art of storytelling.
Posted by Mike Rhode at 10:24 PM No comments: Links to this post