A Big Trip to the Small Press Expo: A Guest Post by Charles Brubaker


One thing that became apparent to me as I became serious about cartooning is that vending in conventions is very important. Not only are comic conventions the best way to network with other comics professionals, but also are a good way of gaining new readers as well.

Figuring out which cons work best for me is a case of trial and error. Even if I focus on cons that are friendly to indie comics, it's still a gamble. I tried everything from a big ones like Baltimore Comic Con to smaller ones like SPACE in Columbus. However, one con I really wanted to go to was Small Press Expo (SPX), which was held this year on September 16 and 17.

Long regarded as the ultimate indie comic convention in the US, I was very curious about what it's like. Getting a booth there wasn't easy, as SPX gets thousands of application every year, while only being able to take a small number (I believe that nearly 600 people exhibited this year), so they choose who gets to have a table by using a raffle system.

To say it took me a while to get a space there is an understatement. In fact, it took me 2 years until luck shined on me. SPX was the fifth con I went to in 2017 (including a free table space I got at a children's book festival in my local library). I normally try to reserve my number of conventions to three due to cost factor, but I decided to take the SPX offer because, well, it took me years to finally get an opportunity.

I would normally fly to conventions, but after several airplane trips and going through TSA, I decided to drive to Bethesda, Maryland with my dad. It was a long trip from western Tennessee; it took two days, with a stop in Huntington, West Virginia. 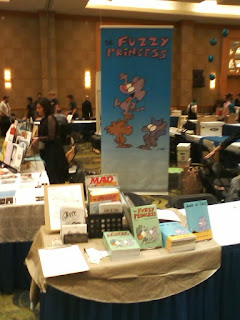 I arrived with several boxes, containing paperbacks of my "Ask a Cat"  and "The Fuzzy Princess" comics, plus left-over minis and floppies from my other cons. Both of my on-going comics feature cats as leading characters. So naturally, the SPX people saw fit to put me in booth K-9 (har har), where I shared space with Lucy Bellwood, who traveled a lot further than I did, coming from Oregon. I don't know if the SPX people gave me that table number on purpose, but I'd like to think they did. It would fit with their sense of humor.

In previous cons, I would normally only sell floppies and mini-comics. I had my "Fuzzy Princess" stories printed in individual standard-sized issues, and minis collecting "Ask a Cat" strips. However for SPX, I had paperback books, having drawn enough material for both comics. I was worried that I would have harder time selling paperback books over the comparatively cheaper minis, but the opposite was the case. I ended up selling far more paperbacks than minis and floppies. As Lucy told me, "people like books with spines." I especially sold a lot of "The Fuzzy Princess Vol. 1," which is more story-oriented. Graphic novels are popular there, it seems.

While I still plan to continue making mini-comics, since they're easy to make, and also because they make great perks for my Patreon, I've been thinking of phasing out my floppies because of the cost. The cost of printing full-color comic books is about the same as printing up a 150-page black and white paperback book, and people would rather pay for $10 paperbacks with tons of content, even in black and white, over a 30-page color comic books that cost $5. 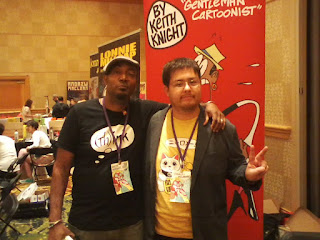 Of course, with nearly 600 people vending, and over a thousand or so people attending, you are bound to run into familiar faces. Pretty much everyone I worked for was there, but I was meeting them in person for the first time. These include Chris Duffy (editor for SpongeBob Comics), Ryan Flanders (art director for MAD Magazine), and Shena Wolf (editor at Andrews McMeel). Other familiar faces included comic creators. It was nice seeing Keith Knight again; the last time I saw him was over 10 years ago, when I was still in high school. Among people who were near my booth were Sponge Bob-contributor Joey Weiser (Mermin), whom I already met a year before at FLUKE in Athens, GA, Drew Weing, who draws "The Creepy Casefiles of Margo Maloo", and Steve Conley, who draws "The Middle Age" for GoComics. I also ran into John Kovaleski, who drew one of my favorite comic strips, "Bo Nanas", years ago. I had my online readers come visit me, which is always a pleasant experience (and a special mention to Mike Rhode, who suggested I write this post when I saw him).

The second day was a lot slower, selling fewer books, so I took the opportunity to walk around the con more. The thing about cons this big is that there will be creators you admire, but had no idea they were going to be here. That was the case with KC Green and Meredith Gran. It's impossible to keep track of everyone you know who's going to be here.

In spite of the slow second day, my overall experience was very good. It was a jam-packed event, from seeing everyone who is enthusiastic about comics, to the lively Ignatz Awards ceremony, and the legendary chocolate fountain. Here's hoping I can go back in 2018.

Charles Brubaker is a cartoonist based in Martin, TN. He draws Ask a Cat (http://www.gocomics.com/ask-a-cat) and The Fuzzy Princess (http://fuzzy-princess.com/), and also contributes to SpongeBob Comics and MAD Magazine. His blog is http://bakertoons.tumblr.com/
Posted by Mike Rhode at 9:03 AM