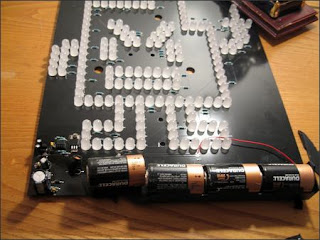 Finally saw the Post, and the Aqua Teen Hunger Force bomb scare marketing debacle played on the front page, above the fold as they say, with the middle finger salute pre-fuzzed out before the Post got the picture, obviating the need for those hard decisions. See
Marketing Gimmick Goes Bad in Boston; Light Devices Cause Bomb Scare by Michael Powell, Washington Post Staff Writer, .Thursday, February 1, 2007; Page A03 for an account of the ridiculousness.

There's a positive review of the Japanese Cultural Information Center's Shojo Manga exhibit in today's Express, and a short version of AP's article on the Aqua Teen Hunger Force bomb scare in Boston in the Examiner. On the odder side, Kohl's has an ad on p. 7 of the Examiner for Sandra Boynton books, cds and toys as well as an ad for Disney on Ice celebrating "100 Years of Magic." I assume that's 100 years since Disney's birth because I'm pretty sure there wasn't any Disney on Ice in 1907. The ad asks for a poem of 100 words or less, sent to contests@dcexaminer.com on "Is the Disney Magic a part of your life?" to win tickets for 4 to the show. Oddly enough they say, "Winners will be randomly selected" so I wouldn't worry about the quality of the poetry.

Finally, the Express has a picture of Greg Bennett of Big Planet Comics on page E25, in his role in the band Jet Age. I believe this is the 3rd time they have run this pic.
Posted by Mike Rhode at 11:57 AM