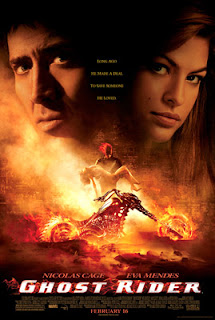 I could get into writing these headlines. The Post reviewed Ghost Rider today, which was not screened for critics - apparently that's always a bad sign.

Hunter's main point is: "Ghost Rider" is a compelling image in search of a movie.
And he wraps up: Mainly the movie's about riding a bike at the speed of sound while your head is burning. They can do anything these days, which isn't quite the same as saying they should do anything these days. 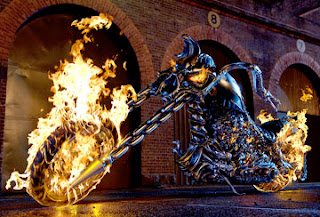 Writer/director Mark Steven Johnson drapes the entire project with a layer of cheese, but it's never gooey enough to make "Ghost Rider" a guilty snack. And making Johnny groove to Carpenters' music to psych himself up for a stunt is as creepy as his flamed-out skull. "Ghost Rider" is no "Spider-Man." Heck, it's less interesting than either "Daredevil" or "Elektra," leaving the audience cursed for nearly two hours.
Posted by Mike Rhode at 7:13 PM