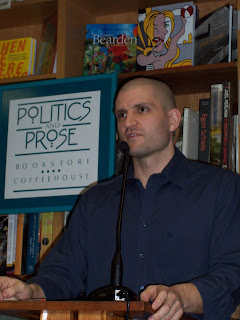 
Scott Rosenberg, following up an interesting but off-topic interview with SF/fantasy writer China Mieville.... well he did put a comic he wrote and Liam Sharp illustrated in his last collection so we'll let him in... interviewed Jeff Smith for an article in today's Express. I haven't read the first issue of the comic yet - I'm waiting for the trade as the kids today say.

And in tomorrow's Post (you'll just have to wonder), Michael O'Sullivan has a review of the shojo manga exhibit. I met him at a New Year's Party (namedropping!), introducing myself because he was talking about the excellent Hiroshi Sugimoto exhibit that was at the Hirschhorn Museum last year with another one across the street at the Sackler following close behind it. In tomorrow's review, I think he has this exactly right: Still, one of artist Masako Watanabe's drawings on view, from a comic created for readers (if that's the right word) in their 20s and 30s, features a graphic sex scene more reminiscent of shunga, the erotic variety of ukiyo-e, or traditional woodblock prints. Another image, from "Chumoncho," a comic by the same artist, depicts a murder-suicide by a lovesick courtesan. With its delicate spray of bright red blood frozen in midair, it's among the exhibition's most striking pictures.

These are by far the most striking images, and even though the both sex scene and the violence are quite explicit, they are mounted in the building's lobby where anyone can see them at any time. Go see the show before it closes to see what he meant.
Posted by Mike Rhode at 7:14 PM