Scott Nickel has 20 Questions with Cory Thomas at his A Nickel's Worth blog Thursday, September 10, 2009. Thomas, whose strip is in the Post, used to be a cartoonist at Howard University.
Posted by Mike Rhode at 10:15 PM No comments:

Watch Your Head sneaks condom gag in on Post

After having a storyline about Quincy's girlfriend who was pretending to be pregnant to get married, the Watch Your Head strip ended up on August 11th with a condom joke, using terminology that became common during the AIDS crisis. As his friend says, "...You'd think someone like you would always wear a helmet." "I don't like the way headgear feels," replies Quincy.

I can't believe we're protected by the Post's vigilant editors from Dick Cheney innuendos in Tank McNamara, but Cory Thomas is able to sneak such filthy double entendres in.
Posted by Mike Rhode at 5:47 PM No comments:

Here's some comments on comic strips from Gene Weingarten's January 6th chat that mirror some of the concerns of this blog lately:

2D, color on Sunday: You once called 9 Chickweed Lane "reprehensible." Why? Is it the pseudo-sophistication? The unbearably snotty and phony way the characters speak? The lack of chins?

While we're there, have you followed the latest story, in which Amos and Edda finally have sex? I wonder: Is this the first time a character has lost his or her virginity ("maidenhood" in the strip) in the comics?

And finally, I had to laugh when I saw this,* in which McEldowney whines about the cruel realities of deadline to explain why the loss-of-virginity storyline is on hiatus.

Gene Weingarten: Interestingly enough, we appear to be watching the deflowering of Cory this very week in "Watch Your Head."

Liz, can we link to one or two?

comic,AL: What's your opinion on the "pseudo-affair" plot line in Sally Forth? Although it would be scandalous, and since the strip is called "Sally Forth," unlikely, for Ted to take Aria up on her offer I think it would be a huge improvement to the strip for him to develop a backbone. Otherwise I think Sally will just say "walkies!" and he will follow her home like the good dog that he is.

Gene Weingarten: I am annoyed by possessiveness in marrige, so I am annoyed by this plot line. Having said that, it is an interestingly ambiguous dynamic, and I respect the writers for it: Nothing is "going on," and yet both parties are disturbed. So is, in fact, something "going on"?

To me, the great part of the Sally Forth storyline is Sally's ma constantly intimating that Ted is a woman.


*one of our famed local comic strip artists was also caught short by his syndicate deadlines, but worked through a family vacation to stay on time...
Posted by Mike Rhode at 6:17 PM 2 comments:

After 9 Chickweed Lane's characters experienced their shared joy, perhaps it was inevitable that others on the comics page should lose their virginity as well. Today's example is apparently Watch Your Head with a 27-second life-changing moment.

And while I don't want to take over Comic Riffs role, I can't help but note the flat-out sincere insincerity of Wiley's Non Sequiter today.
Posted by Mike Rhode at 10:09 PM 2 comments:

The last page of the Post Magazine on Thanksgiving has a full-page Cul de Sac strip. I have a suspicion this one is recycled, because it looks like watercolors rather than the Syndicate's limited palette. Also... it's not Sunday! So this is probably just a gimme for the Post.

Since Cavna's presumably taking the day off, also in Watch Your Head, Lio and his pet Cthulu (see HP Lovecraft in Wikipedia) make a guest appearance. Whoa, just checked and he did pick Thanksgiving strips to mention - however, we've got a 10-point deduction for not recognizing one of the Elder Gods.
Posted by Mike Rhode at 4:00 PM 4 comments:

Pointed out by Robert and Brenda, last Monday's strip seems to be placed at Big Planet Comics, which would be one of Corey Thomas' local comics stores. There used to be an Another World/Universe chain in the area too, until they imploded. 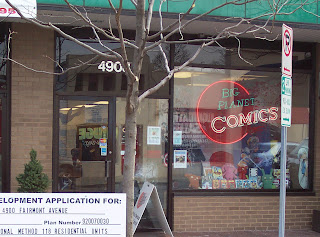 Posted by Mike Rhode at 8:39 PM No comments:

The Post has picked up on the February 10th collective protest by cartoonists of a darker shade of pale - "Cartoonists to Protest Lack of Color in the Comics," by Teresa Wiltz, Washington Post Staff Writer, Wednesday, February 6, 2008; C01. The protest is largely the idea of local cartoonist Corey Thomas who does 'Watch Your Head.'

I'm afraid I agree with the opinions that Gene Weingarten expressed in his chat update today, although I like Baldo and La Cucaracha well enough. Boondocks' McGruder's comments in the initial article are interesting too - unfortunately I don't think a lot of the college cartoonists are able to sustain their strip. I was a fan of Watch Your Head when the Post tried it out, but it's become a real one-note strip.

Gene Weingarten: Here's an interesting piece in today's Style section, about a planned protest by cartoonists-of-color.

I sympathize with these guys, and many of them produce good strips that are victims of a de facto quota system. But there's a difficult truth that undercuts their argument. In devastating economic times, newspapers are (unwisely, I believe) ruthlessly squeezing the life out of their comics pages. So there is plenty of pandering going on in all directions -- a naked, desperate effort to appeal to every possible perceived constituency -- and that has nothing to do with racism. With limited space, there are quotas for everything. Believe me, the only reason newspapers run the painfully bad Prickly City is that they feel they need to offer a conservative voice on the page, to counterbalance the lefty Doonesbury, Candorville Nonsequitur, etc. The only reason newspapers run Dennis the Menace and Beetle Bailey and Classic Peanuts is to appeal to the oldsters who they believe would feel lost without these mild, mealy things. Family Circus is for very, very young readers, and preposterously stupid adults, and lovers of camp humor. This appeal-to-all-demographics impulse leaves very little room for ANYONE to break into a newspaper.

There is another factor undercutting their argument: For some, the despicable quota system has worked splendidly. The only reason The Post runs the weak Baldo is that the pandering alternative is the weaker La Cucaracha.

It's a pretty bad situation all around.
Posted by Mike Rhode at 5:59 PM No comments:

I don't think that La Cucaracha by Lalo Alcaraz got its full tryout time, but yesterday the Post ran this notice:


Today, "Watch Your Head" by Cory Thomas returns to the comics pages to replace "Boondocks," whose creator, Aaron McGruder, decided not to continue the strip after a six-month sabbatical. Written by Cory Thomas, a Howard University graduate, "Watch Your Head," chronicles the lives of six students at a historically black university. If it looks familiar, it may be because it was the first tryout strip The Post ran in place of "Boondocks" during McGruder's absence.