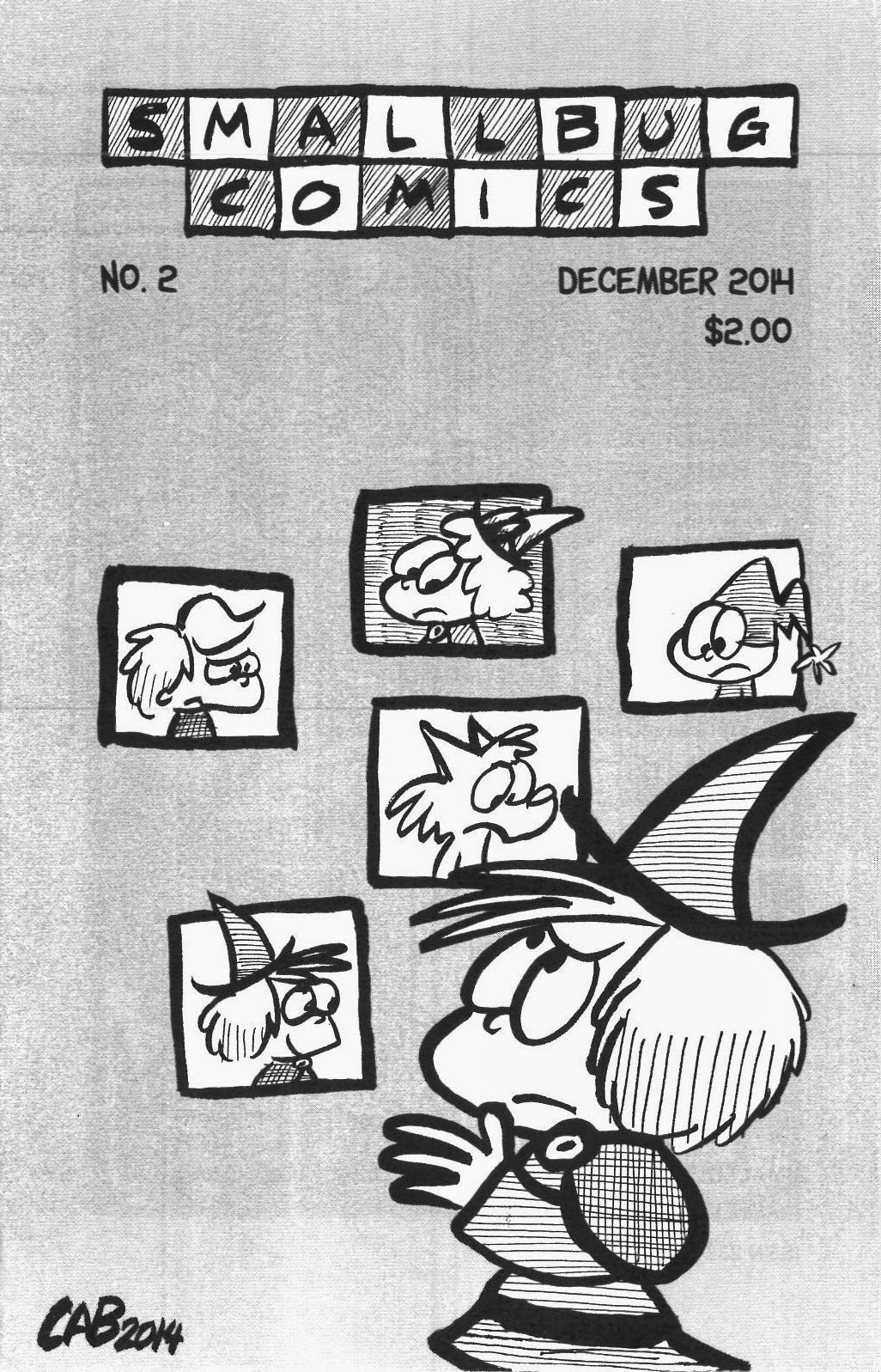 It's been months since I've had the time to post any reviews, but some new material has arrived in the mail recently and it's prodded me to start again. I'll try to work my way backwards too, even if it's only a brief mention of the book and my thoughts on it. - Mike Rhode* 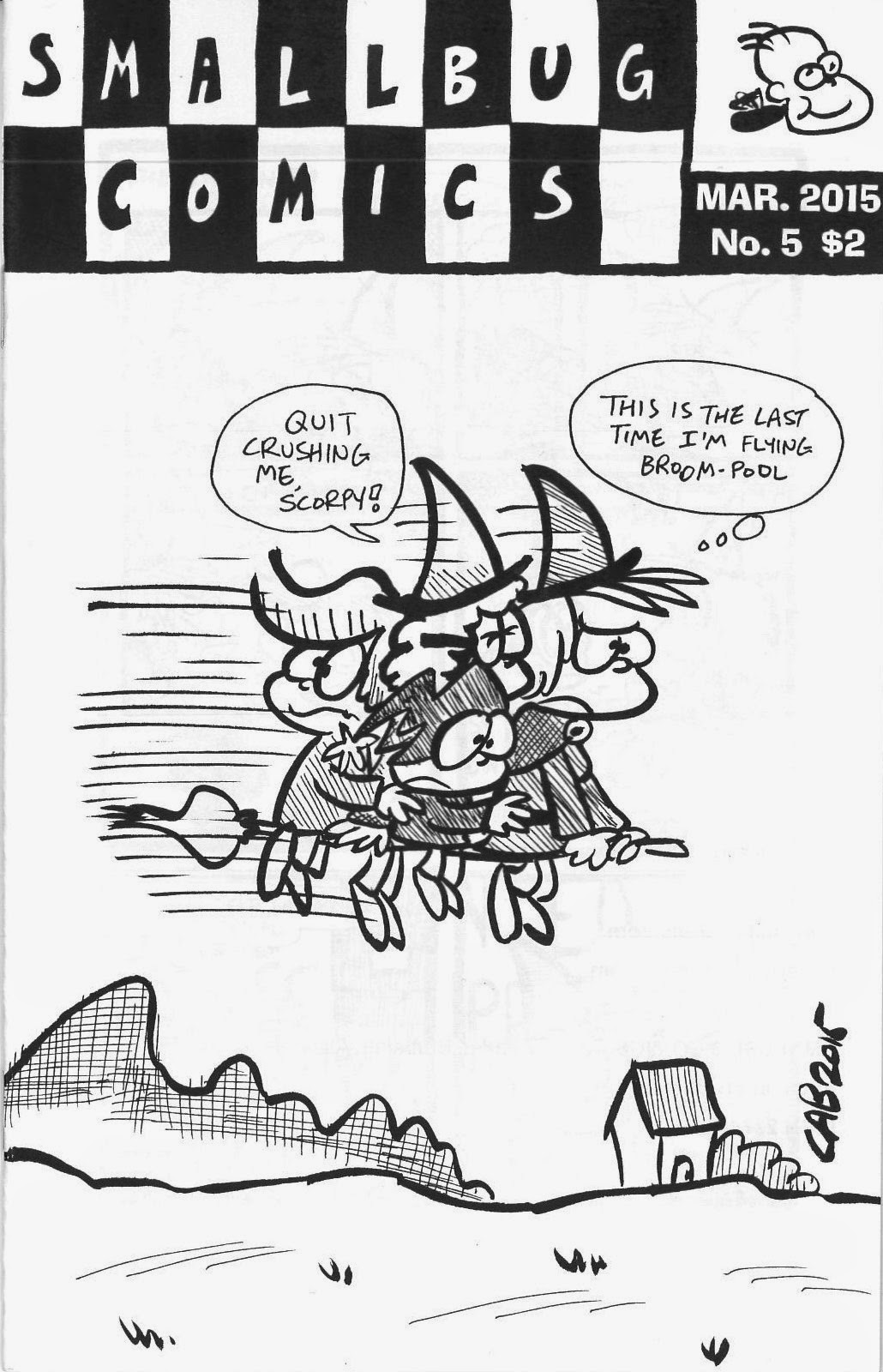 Charles Brubaker's minicomics, Smallbug Comics #2 (December 2014) and #5 (March 2015) remind me of the heyday of Harvey Comics. His characters Koko the Witch and her younger brother Jodo would easily fit into Casper the Ghost's world. In #2 Jodo accidentally acquires the Wizard King's crown and proceeds to enjoy all the attention he gets -- until the crown is reported stolen. In #5, Koko and Jodo take an 'enchanted' yet still horrible train ride for a break on their annual day off. Both stories rely heavily on physical humor and sight gags. Brubaker's storytelling is competent -- you can tell what's happening, and the words and text work together (this isn't always true of comics, even from full-time professionals). 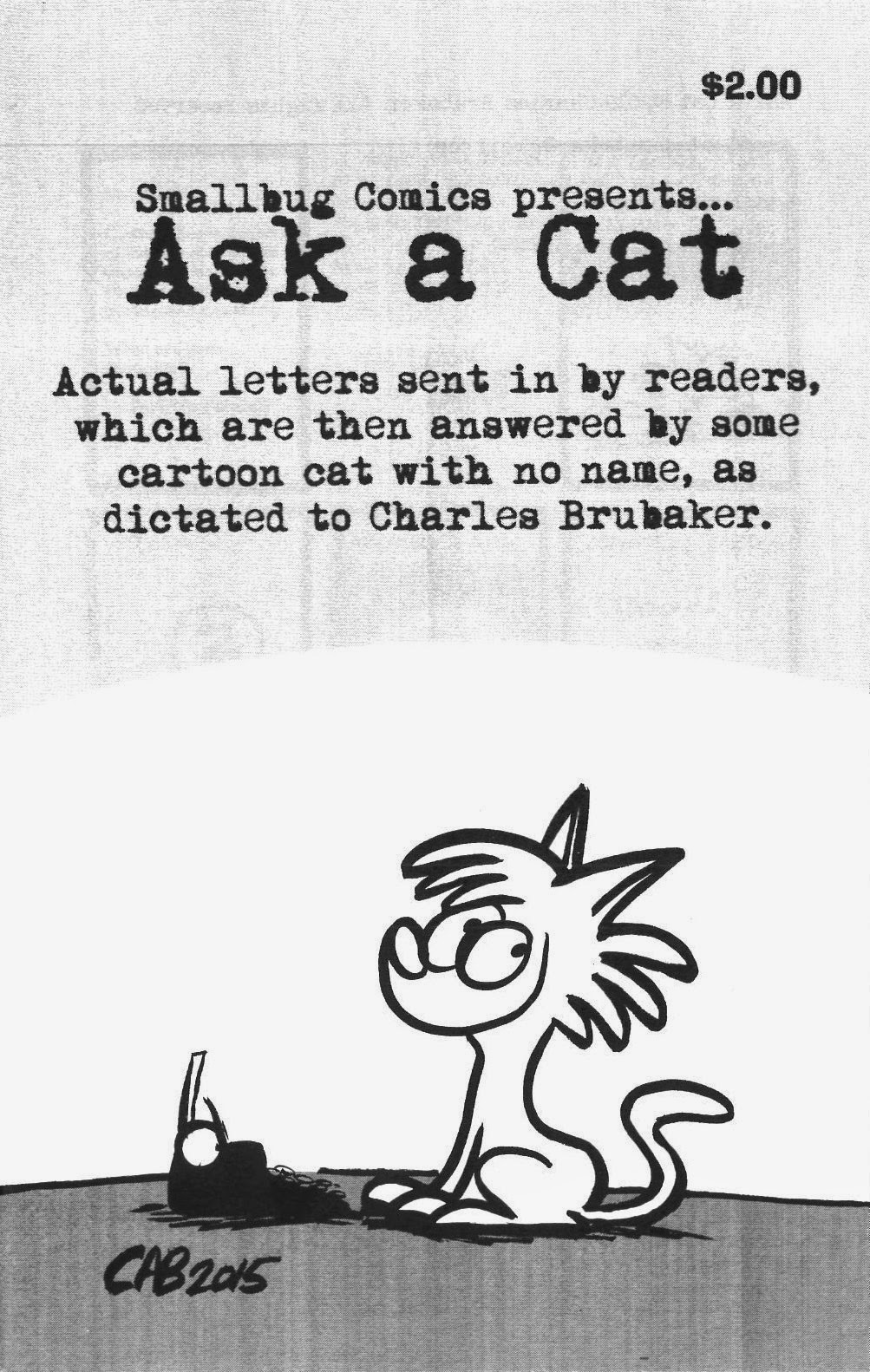 Ask a Cat consists of 1-page cartoons from an advice column answered by a cat. They didn't do much for me, but a colleague at lunch laughed out loud at "What should I make for dinner?" and "Meow, meow, meow, meow. Meow?" The appeal of this zine probably depends on your interest in cats on the internet.

I think these minis would be good for teens, especially those interested in DIY comics. Brubaker's websites are www.bakertoons.com and bakertoons.tumblr.com Brubaker also writes on the history of animation at Cartoon Research. 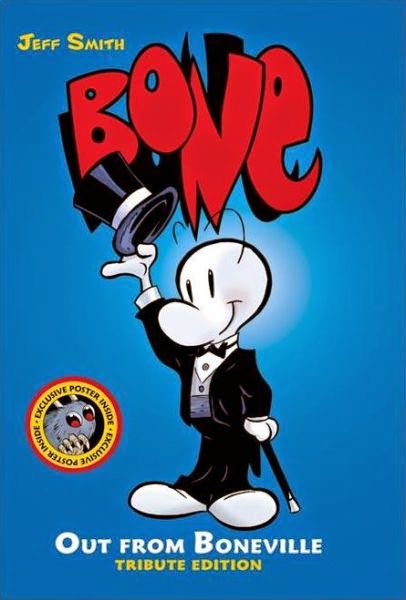 Jeff Smith's Bone: Out from Boneville Tribute Edition (Scholastic Graphix, $15) is a very pretty version of the beginning of the almost classic graphic novel. An insensitive or suspicious reviewer may believe that this edition is an answer to the age-old question of "how to sell yet another version of the book to people who already have it?" I personally have the original comic books, Smith's b&w reprints, Smith's one-volume b&w reprint, and the Scholastic editions with Steve Hamaker's excellent coloring. This 'tribute edition' is for Scholastic's 10th anniversary of publishing the story; the comic books themselves began in the early 1990s. And what's the tribute one may wonder? In addition to a "brand-new illustrated poem by Jeff Smith!" one also gets "minicomics and artwork inspired by Bone, created by 16 bestselling, award-winning artists." The poem features the Rat Creatures and much of the artwork is from Scholastic's stable of cartoonists turned children's book authors. For the record, the sixteen are Kate Beaton, Jeffrey Brown, James Burks, Frank Cammuso, Nathan Fox, Jimmy Gownley, Kazu Kibuishi, Mike Maihack, Scott Morse, Jake Parker, Dav Pilkey, Greg Ruth, Dan Santat, Raina Telgemeier, Doug TenNapel and Craig Thompson. Snark about multiple editions aside, Bone is one of the great comics for youngsters, and this version is a good introduction to the series. 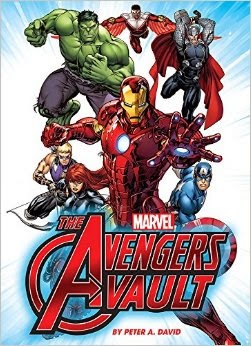 Marvel: The Avengers Vault (Thunder Bay Press, $35) is by noted comic book writer Peter David (who, according to the Grand Comics Database, never actually wrote the Avengers). As a wee lad, my favorite superhero team was the Avengers. I'd been given a copy of Avengers #8, introducing Kang the Conqueror, by a cousin, and I spent the next 25 years buying their comics. I can't really relate to the Avengers-centric Marvel Universe of today, but the movies are well-done and probably a good part of the reason this book exists. And honestly, the kid reading Avengers #8 would have loved this book. The 'Vault' part of the title is "ten collectible pullouts: a Thor poster, concept art for Iron Man, Captain America's Sentinels of Liberty membership card, original art by Jack Kirby, and more - perfect for the superfan's bedroom wall." The text of the book is quick summaries of the histories of the Avengers and its most famous members Captain America, Iron Man, Thor and the Hulk. David does a good job of summarizing almost 50 years of comic book backstory for each chapter, including the major supporting characters, and highlighting Marvel's post-Civil War history. Chapter 6 is a brief look at animated television adaptations, and then there's an appendix of Avengers members which splits into teams such as The Illuminati, the New Avengers, and the Mighty Avengers. It's too much for this aging fan's brain, but a tween who likes comics or the movies should love this book.

*'International Ink' is what Jonathan Fischer, my first editor at the City Paper, titled the column whenever I did book reviews.
Posted by Mike Rhode at 7:51 PM