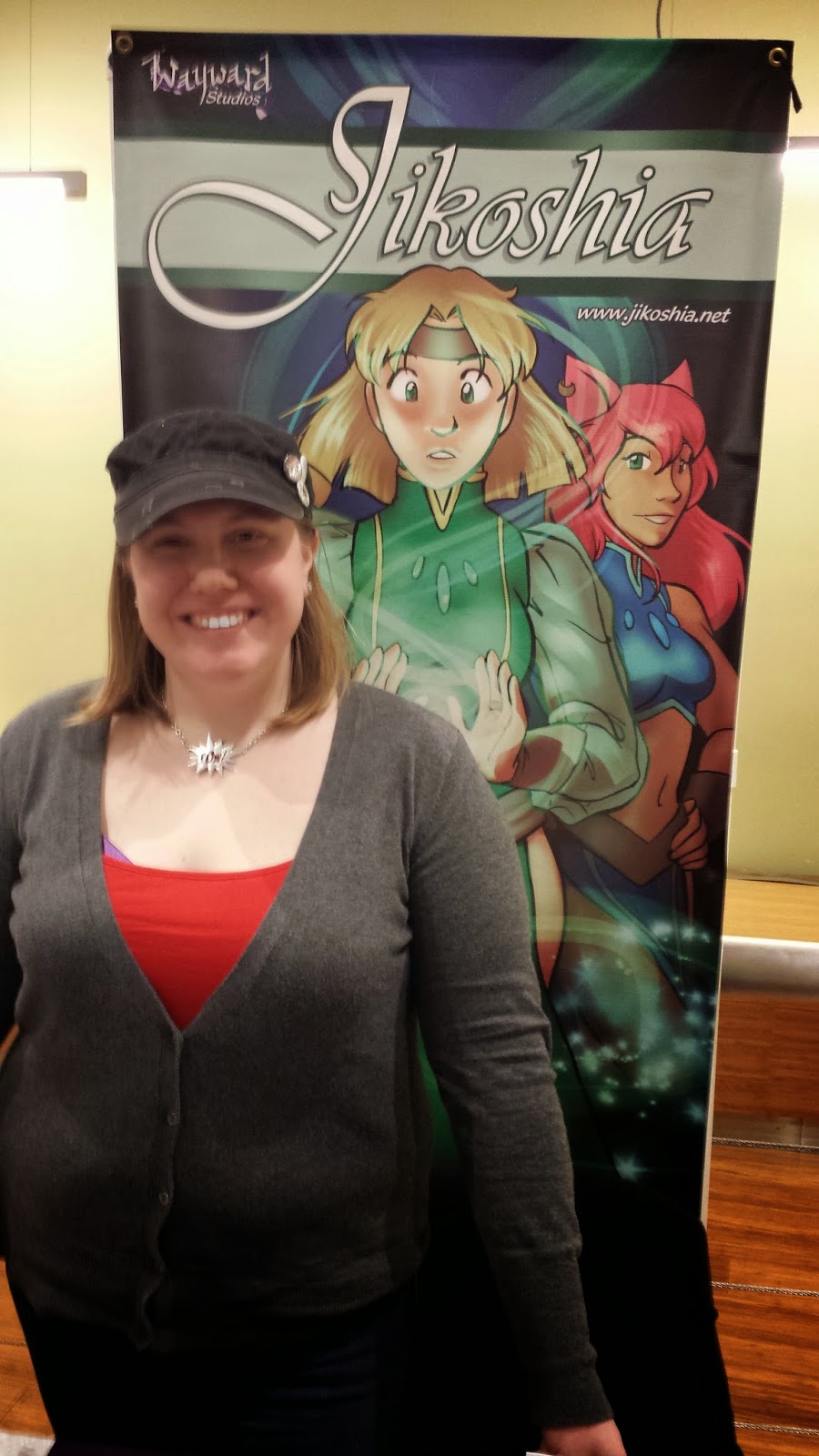 Emily R. Gillis was a Smudge exhibitor, selling a collection of her webcomic Jikosha. She's a founder of the local cooperative, Square City Comics, and one-half of Wayward Studios. Her comics can be bought here.

I primarily do longform fantasy comics with a style heavily-influenced by anime I grew up watching. I also have participated in the 24-Hour Comic challenge for the past 4 years and like to turn those into minicomics.

Mostly traditional. All of my comics are first drawn with pencil then inked with microns and brush pens, though I've been experimenting more with brush and ink. Coloring and lettering are all done digitally though most of my coloring is done by the other half of Wayward Studios, Crystal Rollins. I've been practicing digital colors with her help, but she is a magician with them!

Why are you in Washington now? What neighborhood or area do you live in?

I moved to the Baltimore area to seek out more work opportunities and to move in with my boyfriend, now husband. Currently, we're up north in Cockeysville, MD. I'm down in DC every month though for events and for meetings with my friends in Square City Comics.

I earned a bachelor's degree in graphic design back in 2006. I never formally studied cartooning, but I remember making comics as far back as the 4th grade when I turned my teacher into a superhero for a story. I mostly learned from reading books on the subject and just reading other comics.

Starting out, I was heavily influenced by anime like Sailor Moon, Magic Knight Rayearth, and Dragonball Z. Currently, my work is most influenced by other local creators I've met as well as webcomics I follow. Comics like Namesake, Sister Claire, and Stand Still Stay Silent are the first ones that come to mind for works I look to for inspiration and technique.

Get serious about comics sooner. I went into graphic design since I figured I could both get a job more easily with that degree and I could apply what I learned there to comics, though I'd never really considered comics a valid career option. I didn't pursue it seriously until a few years ago and it's been a struggle trying to turn it into a full-time gig rather than something I have to make time to do outside of my day job.

I'm best known for my webcomic Jikoshia. I began writing the comics back in high school and rebooted it three times before bringing it to print.

I have two comics that I'm super proud of. Jikoshia has come so far and turned into a project I really love. I recently brought my latest 24-hour comic to print as well, All You Held Dear, and for being a comic written in such a short amount of time, I'm really happy with the way both the writing and the art turned out!

I just want to more time to work on personal projects. I have a "vault" of story ideas and scripts I have yet to finish and I'm anxious to get to them!

That's when I refer to Crystal. Part of why we formed Wayward Studios was to help each other out when we get into blocks. We'll talk through problem scenes or give the other a kick in the pants if we slack off. Another trick I've learned is to go read another comic or play a video game for a while. It gives me a chance to step out of the worlds I've created and into another, helping me refresh my viewpoints.

With the advent of crowdfunding, I'm looking forward to seeing more creator-owned works come to life. A lot of great projects have come about because of this resource (including my own!).

I go to almost every one I can find! I regularly attend Katsucon and Small Press Expo and look forward to this year's Awesome Con. I've only managed to go to Intervention once so far, but would definitely like to again! I also make appearances at smaller shows like Tiger Con in Towson, Library Con in Petworth, and Nippon Con in Westminster. I'm currently planning a small show for a comics group I'm a part of called Square City Comics in June and hope to turn that into an annual gig.

SPX is my favorite event of the year and I recommend it to everyone looking to get into comics. Just make sure to set a budget for yourself otherwise you'll definitely spend your lunch money on books instead of food. Not that I've ever regretted it.

I like that I don't have to drive to most places and that there's so much to do! Before moving to the East Coast, I was living in a very small mountain town and doing anything involved at least a 4-hour drive. Having everything I want to do be so close took some time to get used to and I love having so many options.

Traffic. My sense of direction is a bit off and too much traffic really throws me for a loop! Plus one-ways are the bane of my existence.

My parents came out to visit for the first time a couple years ago so I took them on a tour of the National Mall. My dad was like a kid in a candy store at the Air & Space Museum. Next time he comes out I'm taking him to the one in Dulles.

District of Pi in Chinatown is my favorite, though I've heard there's a great ramen place in Rockville I need to try. That might unseat the pizza's throne.

You can find all of my work and learn where I'll be next on waywardstudios.net. I also sometimes post work and news to my Tumblr (thealmightym.tumblr.com) and Instagram (@thealmightym).
Posted by Mike Rhode at 9:53 AM