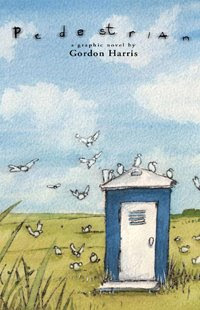 Ray, the pedestrian, wanders the post-apocalyptic suburbs and discovers a mysterious package, an elaborate tree house, and carrier pigeons. He meets Tamaya, a self-acclaimed, closet-conspiracy theorist who lives in the tree-house, and they soon embark on a search for the origins to a mysterious map carried by...er, one of the carrier pigeons.

About the author
Gordon Harris lives in Annandale, Virginia with his wife Judy, twin daughters Violet and Silver, and three gerbils whose names escape him. He graduated from Parsons School of Design but his day job is NOT writing, drawing and painting graphic novels. He's always had a desire to, but it seemed like a lot of work, so instead his day job consists of watching TV shows like Curious George or Wild Kratts and writing promos for them - among other tasks.

If you'd like to see more, here is a preview link for PEDESTRIAN, and you can visit my Facebook page (Ray, the pedestrian) for more info.

Notes about PEDESTRIAN from Ray, the pedestrian

Gordon Harris doesn't like to look back. He usually dismisses regrets within a few thoughts. It's just not good for the soul. However, he admits to one sole regret that would prove difficult for anyone to redeem, which is; "that I will not be around for the apocalypse." Morbid? Not so much - considering the current landscape of the undead and living dead that's infected our pop-culture. At the age of seven (that's not a typo), one of Gordon's daughters posed the quintessential question, "What's the difference between the undead and the living dead?"

If your tastes for entertainment don't always include fresh brains and/or blood, this beautifully drawn, full-color, 54-page graphic novel is a fresh approach to the postapocalyptic theme. The world and its inhabitants haven't gotten off easy in PEDESTRIAN but like it says above, there are no zombies or vampires around. 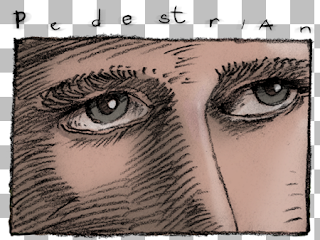 I'm not so much alone in the world, I'm just searching for that elusive garment bag. My bellhop attire seems to suit me, and harkens back to simpler days of spare change and another bellhop named Ace Face. As luck would have it, I eventually discover a mysterious package.

Tamaya is nearly as curious a character as the tree house she lives in. She collects miscellaneous, odd objects and displays them in small, zip-lock bags adorning the walls of her tree house. My introduction to her comes by way of the mysterious package and a persistent pigeon.

Map in hand, Tamaya and I eventually journey to the countryside and beyond, in search of the maps origin, and anything else for that matter.
-Ray
Posted by Mike Rhode at 10:01 PM