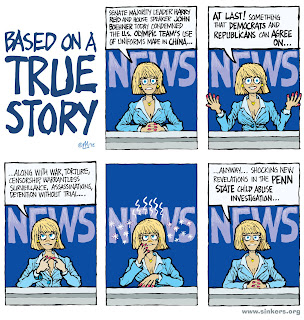 I'm afraid I've neglected Mike for the past few months, but here's his latest release:

No, really, it is, at least parts of it.

I was on my way downstairs for a sandwish one late morning last week or so, and I passed by the bedroom, where the DW is catching up on some impresario chores on her laptop while the satellite box is nailed down to MSNBC. As aiways, I stop for a minute or two just to check out what they're emitting, and it's some woman who looked as if she were made entirely of plastic babbling an item about Hill leadership's reaction to the discovery that the US Olympic Team's uniforms had been made in China. Faster than you could say "eight percent unemployment", Harry Reid and John Boehner had crapped their drawers loudly while blurting out carefully crafted Tourette's episodes on the subject of the export of US jobs to China. After offering up this news, the anchorbabe said -- for real, I shit you not -- "At last, something that Democrats and Republicans can agree on."

"...along with war, torture, censorship, warrantless surveillance, assassinations, detention without trial..." the anchorbabe neglected to add.