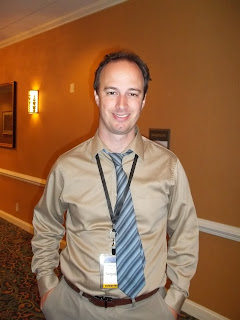 Webcomic writer T Campbell was at the Intervention con last fall. I bought his collections of the Penny & Aggie webcomic when I saw artist Gisele Lagace's artwork, and enjoyed them immensely.He answers our usual questions, although refusing to tell what the 'T' stands for.

Mike Rhode: What type of comic work or cartooning do you do?

T Campbell: Most of my comics are on the Web, one way or another, though many are also in print. I've done a very little work for major print publishers like Marvel, Archie and Tokyopop.

How do you do it? Traditional pen and ink, computer or a combination?
I'm a writer, but many of the artists I work with have switched to a computer-based system since I started working with them. In some cases I honestly don't know. The look of computer work is more and more difficult to distinguish.

When (within a decade is fine) and where were you born?
I was born in Virginia Beach in the 1970s.

Why aren't you in Washington now? What neighborhood or area did you live in?
I bounced around several apartments in the DC area for a few years, trying to get enough freelance work to justify my continued residence there, then got a comics job which took me to Oxford. After that was over, I came back to the Virginia Beach area, where I was more comfortable.

What is your training and/or education in cartooning?
I did a little study at the Savannah College of Art and Design, but as more of a writerly sort, I had to apply my English degree and self-educate from there. Still, the scriptwriting course at UCLA probably helped. 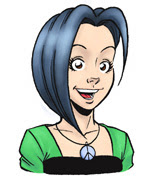 Who are your influences?
Alan Moore, Peter David and Scott McCloud were the ones most in my mind when I started my career. I try to find a new one every few months, these days.

If you could, what in your career would you do-over or change?
Start earlier-- I have a running fantasy of getting in on the ground floor of the Web, when some well-chosen investments could've changed a whole lot of things! Failing that, not do my History of Webcomics book, which was a lot of work for too little money, too much politics and a lingering sense of dissatisfaction. 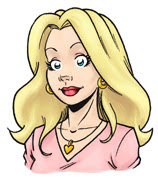 What work are you best-known for?
Almost certainly Penny and Aggie, my just-concluded seven-year story about teenage girlhood, followed by the epic fantasy Guilded Age.

What work are you most proud of?
That's a toughie. The aforementioned pieces are pretty good, but I also have to throw a little love to Fans, my longest-running and most inventive series, about science-fiction fans in science-fictional adventures.

What would you like to do or work on in the future?
I'm just starting a series called Quiltbag, about sexuality, college and finding your identity. 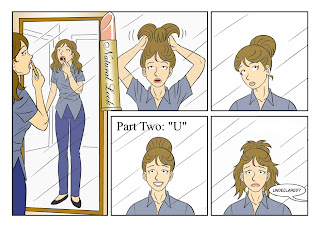 What do you do when you're in a rut or have writer's block?
It helps to change things up. I'm someone who can get very focused-- one might say fixated-- on one thing for an extended period, so I find that shifting that focus usually gives me time to recharge my interest in everything else. 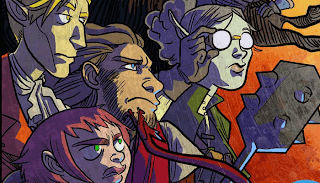 What local cons do you attend ? The Small Press Expo, Intervention, or others? Any comments about attending them?
I've attended both. They're good shows, full of people who seem to have very good attitudes about comics and generally commercially healthy.

What's your favorite thing about DC?
There's so much here-- so much history, so many remarkable things going on.

What monument or museum do like to take visitors to?
I'm fond of the Udvar-Hazy Air & Space Museum. All those giant aircraft and spacecraft in one hangar. Really inspiring.

How about a favorite local restaurant?
I'm a simple sort: a Friendly's is as good for me as anyplace more exotic.

Lots of websites, but you can check me out at http://tcampbell.net to get started.