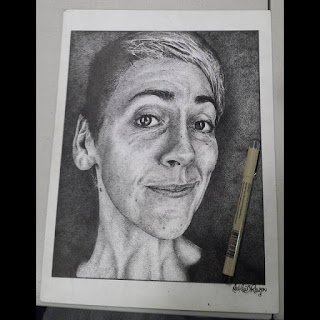 Published with permission from Rawson
Posted by Matt Dembicki at 8:06 PM No comments:

Frederick native cartoons for a living
By Danielle McFall
Special to the News-Post January 26, 2010
Posted by Mike Rhode at 9:55 PM No comments:

Here's the press release on Ms. Corsetto. I've bought her books at Baltimore Comic-Con.
Posted by Mike Rhode at 7:41 PM No comments:

Here's a few - more of same (literally) on my Flickr site set. These are all from Saturday. The hour-long line to get in. Richard Thompson examining his free can of Monster drink during the hour-long wait to get in. Kids and comics - a natural. Steve Conley getting a book signed by Richard Thompson. Jim Dougan's allowed me to reprint his email to me, because he's done a lot of work and provided links for it.

In 2006, I self-published the DC-based comedy graphic novella CRAZY PAPERS, drawn by Danielle (GIRLS WITH SLINGSHOTS) Corsetto, which you can buy at Big Planet, Fantom
Comics which carries the book at both the Tenleytown and Union Station locations (Matt Klokel has been a strong supporter of CP) or Amazon:

It was reviewed fairly well in a variety of places, and even Tom Spurgeon didn't hate it. I was also interviewed by Arion Berger in the Washington Post Express in October 2006, but that's only available as a PDF, so I'll spare you.

Reviews, updates and other things can be found at my LiveJournal:

I was also one of the founding members of the comics collective THE CHEMISTRY SET (http://www.chemsetcomics.com).

At the Chemistry Set, you can see my stories, most of which have appeared in Desperado Publishing's NEGATIVE BURN anthology.

HOW I LOST MY S#?! AT THE APPLE STORE
Drawn by Molly Lawless (from Northern VA!)
Currently continuing, in process…

I'm the editor of the first volume of the print collection from the site, entitled NO FORMULA, which will be published by Desperado Publishing, and will be in the June Previews for release in August of this year. Keep an eye out!

Oh, and last and certainly not least, my comic SAM & LILAH, (a romance/adventure set in DC) drawn by Hyeondo Park, was in the March 2008 Zuda competition, and can be seen here:

We came in 4th, but announced immediately thereafter we would be taking S&L to ACT-I-VATE, the webcomics site started by Dean Haspiel and others, in May:

This weekend at NYCC, I was at the Zuda panel, did signings at the DC booth, etc. I may even submit something else down the road.

Whew! There's more in the works, but this is all for now."

I'll be picking up his book at Big Planet tomorrow. Support your local inkslinger!
Posted by Mike Rhode at 10:20 PM 1 comment:

Colin S. sent in a notice that Danielle Corsetto, Jack Warrenfeltz and Rafer Roberts will be signing the new Plastic Farm paperback collection at Beyond Comics in Frederick, MD from noon until 7 pm. 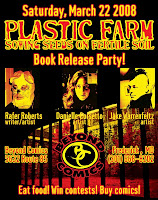 Posted by Mike Rhode at 5:43 PM No comments: