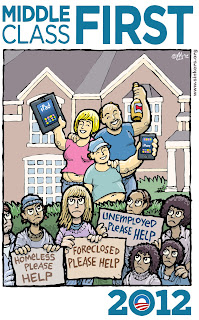 Now, on the surface, this sounds really nice and progressive populist and all, until you stop and think of how Obama bailed out the banks and Wall Street and left the foreclosed and unemployed hanging out to dry, and when you think about how the Presidential candidates of both wings of the Party pander to the middle class while totally ignoring the working class and the poor. In fact, at my count, at last Wednesday night's "debate", I heard the phrase "middle class" spoken at least fifteen times in the first half hour -- until I had to stop watching because my eyes were glazing and my brain was dribbling out of my ears.

To be honest, I'm actually becoming really annoyed at the amount of fawning and gushing and pandering directed at the Middle Class™ by politicians at the media, even as they display indifference -- or, in some cases, flat-out hostility -- towards the working class, the poor, and the formerly middle-class who've fallen into poverty owing to extended unemployment or foreclosure.

Let's also not forget that generally, the Middle Class™ is where all the narrow-mindedness, conformity, materialism and selfishness live.They consume the most resources and complain the most about taxes while demanding the best of everything -- roads, schools, public services -- while joining in the villification of the poor and identifying with the rich, even as the rich continue to screw them royally.

So, perhaps a more accurate slogan for the Obama campaign might be "Middle Class First, And Throw The Poor A Bone If There's Any Left".