Barb Fischer and Chris Impink are webcomics creators who have worked on two long-running webcomics strips. On their Studio Unseen website, they describe their respective roles: "Barb Fischer does the writing as well as merchandise assembly and convention spotting; when not plotting out the nuts and bolts of Sledgebunny, she takes care of her nine-year-old son which gives her just enough time in the day to take one or two breaths before plunging back into the fray. At some point, she’s hoping to find the time to use up the boxes and boxes of fabric she owns. Chris Impink does the artwork and web design; he has been featured in Antarctic Press and did much of the graphic work forThe Babylon Project role-playing game. Additionally, his work has been featured at various conventions such as Katsucon, Technicon, and Rising Star. He is also mildly notorious for co-founding Katsucon, though his team of spin doctors has kept that under wraps for many years. In his rare moments of free time, Chris works with the crew from Super Art Fight, running the Wheel of Death and notching up wins on the championship belt." I met them at Intervention con this year and they agreed to answer my usual questions. 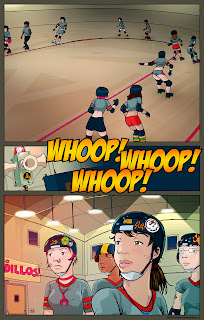 Barb: We have a graphic novel-style webcomic based in the world of roller derby called "Sledgebunny".

ComicsDC: How do you do it? Traditional pen and ink, computer or a combination?

Chris: The initial drawings are done in pen and ink, but the backgrounds and coloring are done in Photoshop.

ComicsDC: When (within a decade is fine) and where were you born?

ComicsDC: Why are you in Washington now? What neighborhood or area do you live in?

Barb: When I moved here in 1999, it was because my then-husband had gotten a job up here. I currently live in Centreville.

Chris: I grew up in the area, but had moved to Blacksburg for a while. I came back when the job market wasn't great in southwest Virginia for artists. I currently live in Annandale.

ComicsDC: What is your training and/or education in cartooning?

Chris: While I have a degree in graphic design, my training in cartooning is largely self-taught.

ComicsDC: Who are your influences?

ComicsDC: If you could, what in your career would you do-over or change?

Barb: We'd be a bit more aggressive in marketing ourselves; we tend to be a bit quiet.

ComicsDC: What work are you best-known for?

ComicsDC: What work are you most proud of?

Chris: Fragile Gravity, because I stuck with the project for seven years.


ComicsDC: What would you like to do or work on in the future?


Barb: Animation would be nice; there's also some short stories I've got on a back burner.

Chris: To revisit "The Vince Posthumous Files", which was a story-within-a-story in our last comic.

ComicsDC: What do you do when you're in a rut or have writer's block? 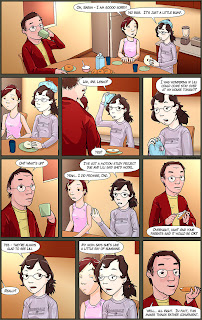 Barb: Be very depressed, then back away from the story a while until I can get a clear head again.

ComicsDC: What do you think will be the future of your field?

Chris: Content delivery is being changed so much by tablets and smartphones that it's difficult to predict, but clearly comics will drift further away from traditional forms.

ComicsDC: What local cons do you attend ? The Small Press Expo, Intervention, or others? Any comments about attending them?

Barb: Intervention, Katsucon, Otakon, Anime USA, Balticon -- and that's just the ones in the DC metro area. We're very lucky that there are so many choices for fans here.

Barb: The fact that there's so much to try out and do at almost any time of the year.

ComicsDC: What monument or museum do like to take visitors to?

Both: The Udvar-Hazy Air & Space Museum.

ComicsDC: How about a favorite local restaurant?

Barb: Our webcomic can be found at http://www.sledgebunny.com; we're also there on Facebook and Twitter.
Posted by Mike Rhode at 12:15 PM