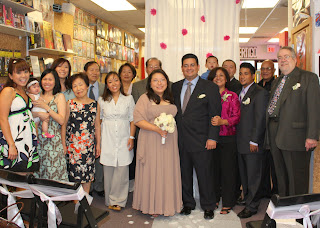 Big Planet Comics Bethesda recently hosted it's first wedding. Joel reported, "On Sunday, August 2, 2009, Alfredo Ignacio & Becky Kim were married at Big Planet Comics, Bethesda, MD." I wrote back to ask if Alfredo and Becky met at the store, and Alfredo replied "No, we didn't meet at Big Planet Comics. When we first met in 1993, one of the first topics of conversation we had was about the X-Men. I had just moved here from NYC and I started working for a Litigation Support company and that's were I first met Becky. The topic of comic books came up while we were hanging out during one of our breaks. Back then I used to live in the Wheaton/Aspen Hill area, but I'd hit Big Planet whenever I was in the area. I became a regular around late 1996 when I moved to Bethesda." Good for them - I had a similar conversation when I started at the Medical Museum although it was probably Miller's The Dark Knight Returns, but Robert Montgomery and I never dated. ;^) We're still friends though.

(By the way, that's Joel on the far right of the picture)
Posted by Mike Rhode at 10:20 AM

Congratulation to you guys !!!!!