...and the crowd goes wild!

Mark Athitakis has a nice writeup of Richard's virtues. The WCP also selected this site as...

Thank you very much! That's very kind, especially after I beat up on the WCP so much this past year about their comics losses. I now feel a very teensy bit guilty. Teensy though. 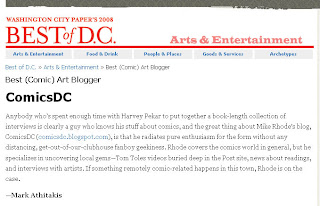 Both of these were spotted by my friend and houseguest Nick "The System of Comics" Nguyen.
Posted by Mike Rhode at 6:32 PM

Congratulations MIke, from one local institution to another.