Book Review: Out Of The Woods: A Journey Through Depression and Anxiety

I recently got an email from a publicist noting that they had sent me a book eleven months ago and I hadn't reviewed it yet. Whoops! When you buy as many books as I do, this happens all too frequently, but in this case it was also a big mistake. Out Of The Woods: A Journey Through Depression and Anxiety by Brent Williams and illustrator Korkut Oztekin (Educational Resources, 2017; ISBN 978-0473-39006-8; $28) is an excellent book and a worthy addition to the burgeoning field of graphic medicine.

'Graphic Medicine' refers to comics about illness or medicine, and are more and more often being done by cartoonists who suffer from the illness. The three main strands of the works are cancer, mental illness, or traditional educationally works (that aren't usually done by patients). This past weekend's Small Press Expo (SPX) had a panel devoted to the topic of bipolar disorder (details below)* which also highlights another aspect of the field - the comics are usually done by a single cartoonist with some experience of the disease.

Out Of The Woods is not. New Zealand's Brent Williams is a human-rights lawyer and filmmaker, who "in his late forties he found he could no longer do this work. It was like he had hit an insurmountable wall. That wall was depression and anxiety. Denial, shame, and a misguided belief he had to fight these illnesses on his own made Brent's situation worse."  His co-author, Turkey's Korkut Öztekin "has worked as editor and chief writer for The Turkish Graphic Design Magazine and freelanced as a comic book artist, cover artist and illustrator for several literary works.Korkut is known for his work on Deli Gücük, a Turkish comic series of ghost stories from rural Ottoman Anatolia. He worked on Clive Barker's Hellraiser: The Dark Watch series as support artist to Tom Garcia, and recently was the lead artist in Frank Miller's RoboCop: Last Stand series." The two men with very different backgrounds, experiences and lives build a surprisingly strong work.

Collaborative works of autobiographical graphic medicine are very rare. Our Cancer Year by Brabner, Pekar and Stack is one of the few that comes to mind, perhaps because it is also successful. Öztekin and Williams work well together and Out of the Woods is a generally seamless telling of Williams leaving his family, quitting his work, and hitting bottom, suffering anxiety attacks and being unable to get out of bed, while half-heartedly trying a variety of self-help meditation and alternative medicine cures, while generally refusing antidepressants and therapy. A major part of this must be due to Öztekin's art, which is clear, understated, but also poetic at times. 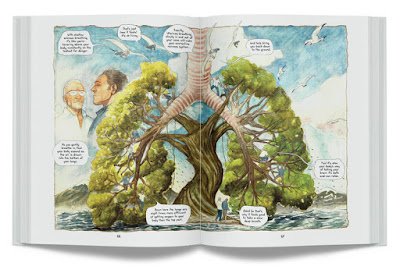 The book's oddest note comes from what I can only call Williams' 'spirit guide'. A middle-aged white man appears throughout the story, in William's thoughts, and offers support and good advice to keep him on a path towards wellness and health. I'm unsure who this person represents, unless it's supposed to be his better self; however, it doesn't look like him. Notwithstanding that, the spirit guide serves as a useful foil showing the reader how Williams' self-destructive impulses can be tamed and how his physical and mental state can be improved.

Williams eventually meets a therapist who helps him realize that his father was a controlling, insensitive (but rich) self-made man who treated his wife and children badly, and that Williams needs to move past thinking of him as a role model and loving father to get well again. The art and writing remain extremely clear, the causes and treatment of depression are examined, the various ways it affects one are effectively shown - in short, this book is an excellent resource for anyone interested in, suffering from, or trying to understand loved ones who have depression. It's one of the best works of graphic medicine that I've read.

As mental health is becoming a subject that's more openly discussed than ever, comics narratives are emerging about personal experiences with mental illness. Moderator Rob Clough will discuss with Lawrence Lindell (Couldn't Afford Therapy, So I Made This), Ellen Forney (Rock Steady), and Keiler Roberts (Chlorine Gardens) their  struggles with Bipolar Disorder, the choices they make they make in writing about it, and how this process affects how they think about it.

Posted by Mike Rhode at 10:00 AM No comments: Links to this post