Merry Christmas from ComicsDC and MJ 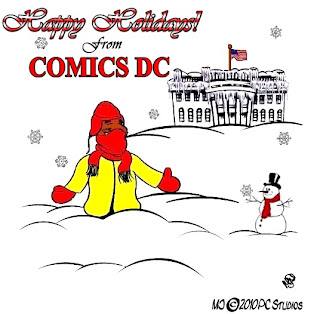 Posted by Mike Rhode at 11:13 PM No comments: Links to this post

Merry Christmas from ComicsDC and MJ

Posted by Mike Rhode at 1:37 AM No comments: Links to this post 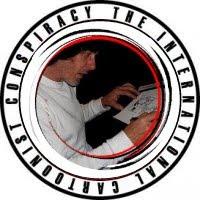 MJ, one of the cartoonists who gave me a logo drawing, wrote in over the holiday with some information on his comic strip, Fiddlestix. With his permission, we'll show some strips and give some history. The earliest examples he sent were twenty years old. "I've been doing it for over twenty years, the first 3 were with a deal from Bill, then after he retired, they were hounding me to change this, change that. I couldn't take it no more. So I took my ball and went home. Wonder often what might of been though..." 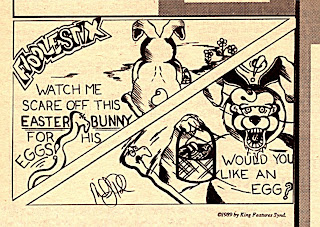 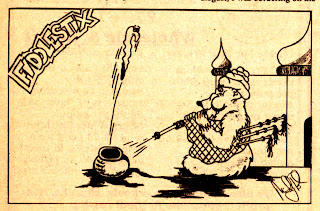 These date from when he and King Features Syndicate were working it up. Of these he said, "They are the two main characters, had a few others but Grizzle, and Irving are always in the strips unless it is a FIDDLESTIX / Pinhead strip. Another main character that I rarely use because of Zippy from Bill Griffith. Pinhead was created not even knowing that there was another out there. At least I eventually learned and the strip now looks so much better."

These are two daily strips. 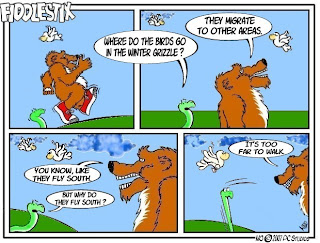 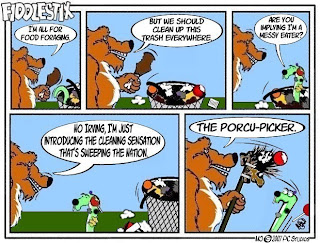 "These were in a digest published by Big Time Attic in 2007 which was distributed internationally. The last 3 panel FIDDLESTIX dailies appeared in SPOON Magazine (U.S.A.) during 2007. The dailies were pulled from publication in 2008 for the 20th anniversary and moved to a sunday only multi-panel format which are syndicated internationally through Newsblaze Publications, Folsom, California. The first color multi-panel format was featured through Scoop/Diamond International Galleries, Gemstone Publishing in March 2008. They appeared in comics distributed in Great Britian, U.K. throughout 2008. They currently appear in Newropeans Magazine (Paris, France), Newsblaze Publications (U.S.A.), and The National Free Press (Canada, Kingston, Ontario),. I am currently working on a FIDDLESTIX comic for distribution internationally in 2010. And of course I am an Editorial Cartoonist for The National Free Press in Canada. The editorial one-shots are also distributed through Newsblaze Publications internationally." 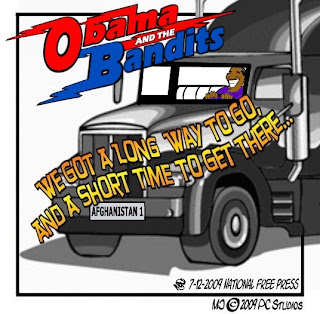 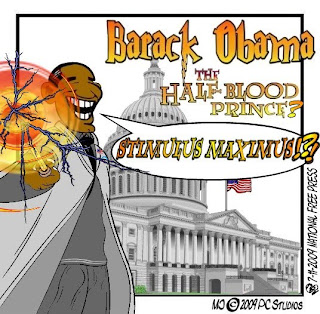 Posted by Mike Rhode at 8:20 PM 2 comments: Links to this post

Another logo donated to us today! 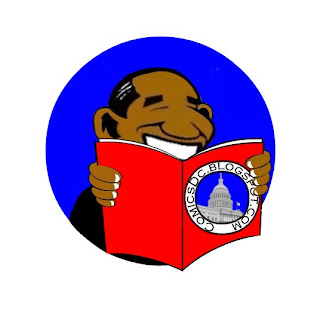 MJ, whose cartoons are syndicated through Newsblaze Publications across the United States and is currently an editorial cartoonist for the National Free Press (Canada), kindly sent in his version of David Hagen's logo today, noting "Just got bored drawing editoons, thought I would do something for a blog I read often. Enjoy." He also notes his cartoons are also carried by Newropeans Magazine (Paris,France) and that he also started cartooning in 2009 for The Nashville Free Press. His cartoons also appear at his Tooned In blog for The National Free Press.

Thanks! I really appreciate it.

MJ is a member of the The International Cartoonist Conspiracy which produced Big Funny, the exhibit and newspaper that I still have to run a review for. [corrected 8/10/09]
Posted by Mike Rhode at 6:25 PM 2 comments: Links to this post