Iron Man's 1976 battle in DC could have gone nuclear 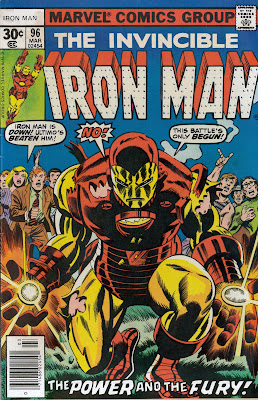 There are a lot of comic books that take place in Washington, so I don't usually take much notice of them. Recently though, I picked up Iron Man #96 from March 1976, which finished a story that I had started reading when it originally came out.

There's two points to note about this comic.

As the comic opens, Iron Man is on his knees in damaged armor while Ultimo stalks towards the White House. The book is massively overwritten by Bill Mantlo as was the style of the time. 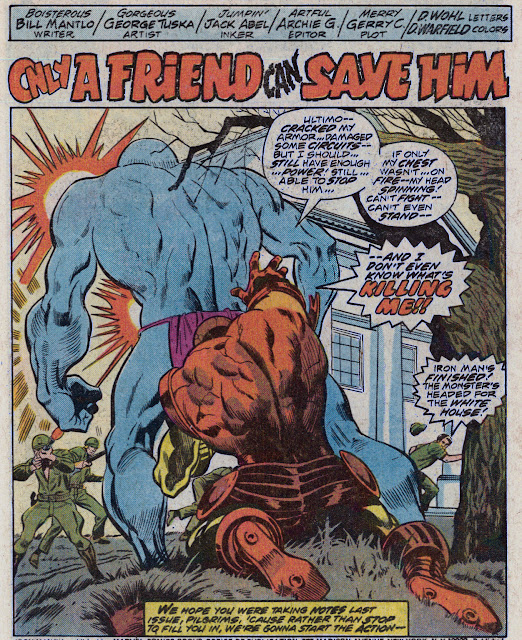 Iron Man lures Ultimo into following him. Given a few minutes to recover in a jet that happens to be piloted by a former ally, Iron Man bails out to return to the attack. He smashes Ultimo in front of the Lincoln Memorial - this should have knocked the android into the reflecting pool.

The first interesting point occurs as they battle around the Lincoln Memorial. Artist George Tuska either had visited DC or done some research because he actually depicts Ultimo stumbling into the side of the of the Memorial Bridge, right by where Rock Creek Parkway runs under the Bridge. Tuska also drew the base of one of the Italian statues that flank the ends of the Bridge.

And then as they continue to battle comes the second point we should note. Iron Man begins digging a tunnel and luring Ultimo down into it.... as an alternative to "mobiliz[ing] a tactical nuclear strike..." Calling in a nuclear strike on DC, on the grounds of the Lincoln Memorial and roughly two miles from the White House and right across the river from the Pentagon doesn't seem like a very well thought-out plan.

Fortunately Iron Man is able to dig deeply enough to engulf Ultimo in magma, somehow avoiding setting off a volcano in Washington, and the Ultimo story ends. Until the next time he shows up. And no, I don't know why an android needs a loin cloth.

Posted by Mike Rhode at 9:47 AM No comments: 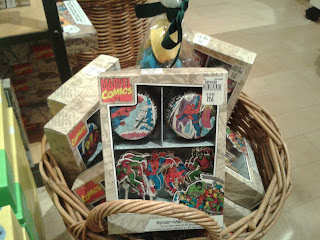 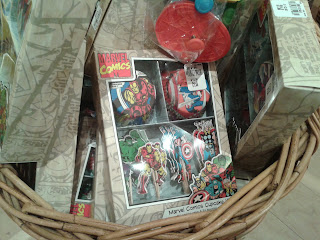 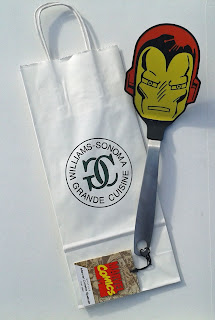 These pictures were taken last night at the Williams-Sonoma kitchen store in Clarendon in Arlington. You can get a lot of baking equipment to make your Marvel Comics characters, and it's on sale! And so are the Iron Man, Captain America and Hulk spatulas - I got Iron Man! $3.99! Posted by Mike Rhode at 5:29 PM No comments: 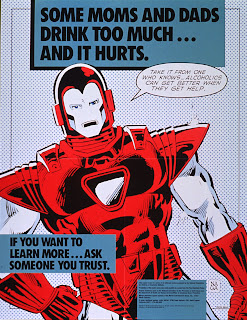 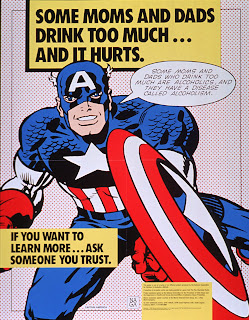 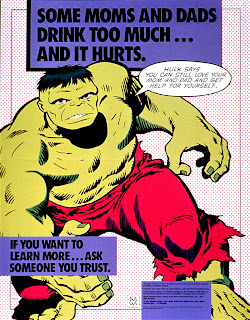 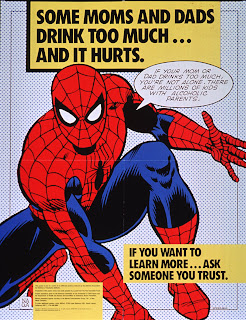 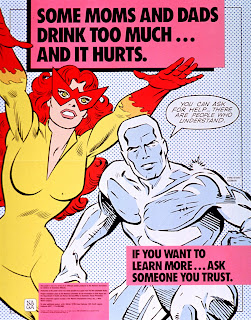 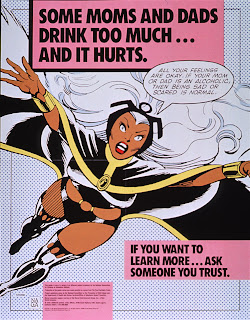 Some times you're looking for something in a library (alcoholism posters) and up pops a surprise like these six posters from Marvel in 1987 on the dangers of drinking to excess.

Here's the links to the images and the catalogue information:

Posted by Mike Rhode at 9:20 PM No comments:

Zadzooks on Iron Man 2 toys and some movie comics

Zadzooks: Escape From L.A., A Nightmare on Elm Street
Joseph Szadkowski, May 11, 2010

Zadzooks: Reviews of Iron Man vs. Whiplash and Viking comics
Viking violence with Finn and Egil
By Joseph Szadkowski
Posted by Mike Rhode at 1:06 PM No comments:

The Post, in its continuing efforts to confuse its readers, has run 2 reviews of Iron Man 2, by the same reviewer, but with different content:


'Man' of the hour [online title: Ann Hornaday on 'Iron Man 2' and 'Casino Jack and the United States of Money'], By Ann Hornaday, Washington Post Staff Writer, Friday, May 7, 2010; C01 should be the premier article, but a review of a totally unrelated type of movie is interwoven.

Movie review: 'Iron Man 2' loses its magnetism, By Ann Hornaday, Washington Post Staff Writer, Friday, May 7, 2010; WE37 should be the minor article, but is the one that actually makes more sense.
Posted by Mike Rhode at 2:16 PM No comments:

Posted by Mike Rhode at 9:47 PM No comments:

How Iron Man got his groove back and new armor By Brian Truitt, USA TODAY.
Posted by Mike Rhode at 3:45 PM No comments: 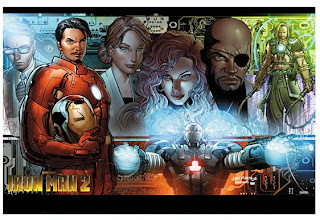 There's an Iron Man 2 poster by John Romita Jr in USA Weekend, which was distributed in yesterday's Examiner. There's a story on the movie by Brian Truitt as well.
Posted by Mike Rhode at 6:42 PM No comments:

Catching up a bit, this article ran online, and then in the paper - "An 'Iron Man' of Epic DVD Proportions," By JEN CHANEY, washingtonpost.com Staff Writer Tuesday, Sept. 30, 2008, Washington Post (October 3).

Following up on Cavna's scoop was "Cartoonist to Put 'Opus' on Ice," By Amy Argetsinger and Roxanne Roberts, Washington Post Tuesday, October 7, 2008; Page C01.
Posted by Mike Rhode at 7:44 PM No comments:

BRIAN STELTER for the New York Times June 14, 2008 reports that "Writers for a Fox Cartoon Walk Out" regarding Sit Down, Shut Up,” which will air next year.

The Post has an article about movies and product placement that specifically discusses Iron Man and car companies, but hasn't put the article online.
Posted by Mike Rhode at 9:33 PM No comments:

I guess I should have thought of some question, any question, that didn't have to do with Marvel's forthcoming movie slate. This wasn't Joe Quesada's fault - the participant's questions had nothing to do with running (and perhaps resurrecting - one can argue the point) a comic book company, and everything to do with one new hit movie. Here's the chat so you can judge for yourself:

See "Iron Man toys show evolution of his armor," By Joseph Szadkowski, Washington Times May 3, 2008. Also, I believe Burger King is offering toys as well.
Posted by Mike Rhode at 9:21 AM No comments:

...and it was good. Fanboy city as I went with friends from work. It's a mish-mash of the Stane takeover of Stark International and Armor Wars and a lot of the Michelenie - Layton years which is when I really liked the comic. Robert Downie Jr. makes the movie though - with a less-talented actor, this would have been a snooze.

See "Nerve Of Steel: To Pull Off the Making of 'Iron Man' Took Some Transformative Powers," by John Anderson, Washington Post Staff Writer, Thursday, May 1, 2008; C01.

Pretty good article - I like Robert Downey Jr. and I've got high enough hopes for this that I'm doing the geek thing and will be at the Uptown on Friday at 7 pm.
Posted by Mike Rhode at 8:50 PM 1 comment: 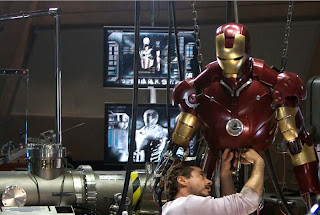 Joel Pollack writes in about a...

Join us Saturday April 26th at 3:00 pm in our Bethesda store for an Iron Man Movie party. We will be giving away many prizes to celebrate what looks to be an awesome movie. We will be holding a homemade Iron Man Costume Contest, and an Iron Man Trivia Contest. Prizes will be awarded to every participant who enters the contests, and a Grand Prize will be awarded to the overall winner. Actually making an Iron Man costume will count heavily towards winning the Grand Prize. Children are especially encouraged to make costumes. And everyone who shows up to the party will get something. Test your Iron Man knowledge in our trivia contest, or just come hang out and watch everyone have a great time.

The Grand Prize will be:

· A VIP Row for the winner and 10 friends to the Washington DC advance screening of IRON MAN on Tuesday, April 29, and the official IRON MAN video game for XBOX 360.