Art Young and my grandmother (Elsie Artley) were from the same home town, Monroe, Wisconsin. They began corresponding in the 30's. I found this old letter (attached) tucked into an old, tattered copy of Art Young's Inferno among my dad's (cartoonist Bob Artley) stuff.
-Steve Artley
artleytoons
Artley Design Inc.
http://www.artleytoons.com/
Update - Steve's posted the letter and more commentary on his own blog. 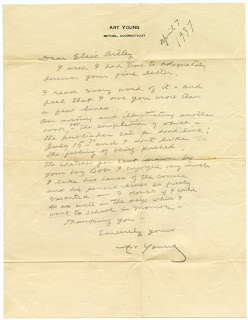 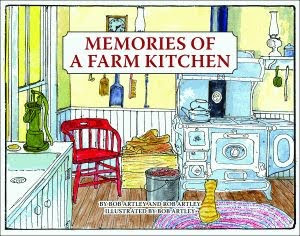 A description and cover image of Memories of a Farm Kitchen was included in the "Holiday Gift Guide: A Food Book for Everyone on your List" of the Food & Think section on the electronic version of Smithsonian Magazine.

http://blogs.smithsonianmag.com/food/2010/12/17/holiday-gift-guide-a-food-book-for-everyone-on-your-list/
Memories of a Farm Kitchen, by Bob and Rob Artley. A charming and utterly unique memoir about growing up on a 200-acre farm in Iowa in the 1920s and 1930s, this homespun book recalls bygone days of icebox refrigerators, cellar larders, and ham hanging from the rafters.


Steve told me a bit more about the book's history-

"This was a book that almost didn't happen. My dad started it about 6 years ago. The last few years, he had a series of strokes that affected his vision and hearing, as well as his drawing hand. One day, while I was visiting him in his Florida studio, he showed me some of the pieces he was working on for the book, and I could see they were not up to his usual level of the dozen books he had produced up to that point. I told him this frankly, adding that I figured he'd want to know the truth."

"I offered to help assemble the pieces and layout the pages, if he could finish the text. A couple of years and another stroke later, he got the text to me and it was not quite up to his usual standards of writing either. So, I called in my brother. I told him the manuscript needed more than mere proofreading. It needed fixes in style, etc. I was so pleased that he took on the assignment with enthusiasm. He far exceeded my art direction. He used Dad's story, but dressed up the style. He even wrote an additional chapter, for which we had art, but no words."

"At my father's urging, the publisher had been planning to put my name as co-author. I was never comfortable with that from the beginning. I was just the art director and project manager. My sister Joan Artley-Sterner also took part in planning out the book. Both of us were more comfortable being listed in the acknowledgments only. So I told the publisher to make my brother the co-author."

That's a nice story about a family pulling together, isn't it?
Posted by Mike Rhode at 10:41 PM No comments: