Local indie publisher Rosarium Publishing is in the midst of an Indiegogo fundraising campaign for its upcoming line of books. Publisher Bill Campbell answers a few questions about his endeavor, which has drawn kudos from Publishers Weekly, the Library Journal and the Washington Post, to name a few.

You publish an interesting mix of books and flow seamlessly in the prose and comics worlds. Has that always been so smooth?  Do you find readers (or maybe distributors and retailers) sometimes raise an eyebrow that you publish both types of books?

I would say that the general public doesn't really bat an eye. You can oftentimes find somebody selling a novel at a comic book convention. So, it's not so much that we have novels and anthologies there; it's just that we have so many. I generally go to the more literary science fiction conventions. Those folks are avid readers, so it's not too hard to convince them to pick up new reading material. It never really hurts to be the book people at a comics convention or the comics people at a book convention. When you're both, you generally have something for everybody. 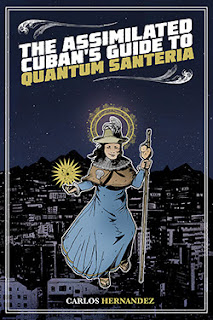 Well, retailers are hard, and I really understand what they're going through. They have very limited space with which to make money. Every cubic inch of their store has to bring in income, so they don't necessarily want to take risks. The excuses sometimes, though. One time, I was pitching The Assimilated Cuban's Guide to Quantum Santeria to a store, and the manager said, “Oh, we don't get many Cubans in this store.” Ha!

Distribution's just hard for any small publisher. The entire field is divvied up by a cartel of distributors who have cornered their individual markets. I don't care what you publish. It's just rough dealing with people who are never hungry and know they'll never be able to feed off the tiny morsels you bring to the table—no matter how tasty.

Being an indie publisher with a drive such as yours is obviously hard work. Can you briefly give a taste of what your recent travel for Rosarium Publishing has entailed? What keeps you motivated?

Back in 2012, just before I started Rosarium and was pushing my novel Koontown Killing Kaper, I did over 50 events in a year. I swore I'd never do that again, but I still find myself doing 20 to 30. I'm still trying to cut those down, but you're right, I do have drive. So, I sometimes find myself in traveling frenzies. For example, this past month I was in Pittsburgh, Los Angeles, and the Hamptons. I'm doing something local in a couple weeks (Creator Con), and then in May I'm off to Toronto (T-CAF), Philadelphia (ECBACC), and Madison, WI (WisCon). I'm actually supposed to be in Chicago, too, that month, but I think I'm going to skip that. I'm turning 46 on May Day!

What’s been the most difficult part in starting and continuing Rosarium?

Beginnings are hard no matter who you are or what you're trying to do. Usually, the biggest challenge is getting other people to take you seriously. That was definitely ours. On the sff side, we've been really fortunate. Our first anthology, Mothership: Tales from Afrofuturism and Beyond eventually garnered a lot of attention, and our next two (Stories for Chip and The SEA Is Ours) as well. We've been really well-received within that community. 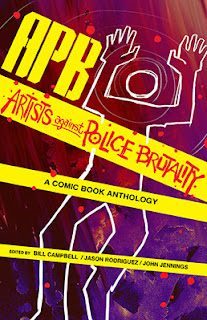 The comics side of things has been harder. We've talked about this personally: It's because comics is a medium, not a genre, and it's immense. So, it's been much harder finding reviewers who'd be interested in what we do, etc.

And frankly, Diamond doesn't make it any easier with the monopoly they have over comics shops. They don't seem particularly fond of what we do. We've taken critically-acclaimed, award-winning comics to them, and they've been like, “Nope! Not carrying them!” Because of that, the irony with our comics is that you can find them in Barnes & Nobles and other bookstores, you can find them in libraries, you can even find some of them being taught in college classrooms, but you'd be hard-pressed to find them in a comic book shop.

But what can you do? It's things like this that simply make me work harder.
Posted by Matt Dembicki at 9:00 PM