A couple of weeks ago (April 3, 2016), the Washington Post published this illustration by Oliver Munday. The comic book is of particular interest to us.

Because it doesn't exist. I think it's a melange of existing comic books, but I can only place the logo and the word "Assemble" both of which (along with "mightiest heroes") come from an Avengers comic book, probably from the 1970s. Any crowdsourcing suggestions? 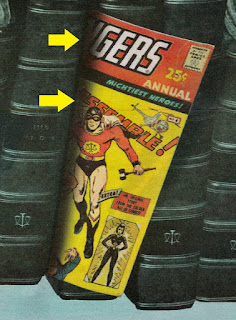