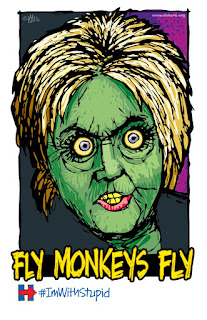 For a few weeks or so earlier this year, MSNBC was running a network promo with this clip of Hillary Clinton speaking, and it had to be the nastiest sounding stuff I'd heard her spew out in years. Hillary's voice sounded raspy, raw, shrieking like a pissed-off junior high school principal, a voice that could cut glass. You could tell she was trying to sound all forceful and dynamic and Presidential n'shit, but instead all I could think of was the Wicked Witch Of The West. With that raspy shrieky voice, all Hillary needed was a big pointy hat and a broom.

No doubt buttloads of old-skool 1970s feminist language cops will get on my case for comparing Hillary to the WWotW, but, hey... if the shoe fits, strap that motherf'r on.