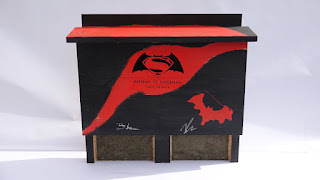 To Be Auctioned for Charity

BLOOMFIELD HILLS, MI, March 7—The Organization for Bat Conservation announced today that it will auctioning and selling bat houses made from the set of Batman v Superman: Dawn of Justice beginning March 21 on eBay. The bat houses range in size and design, with 23 of the bat houses signed by either Ben Affleck, Zack Snyder or both. The eBay site is available at: http://stores.ebay.com/auctioncause/bat-house or www.batconservation.org. The auction will be open until April 4.

The film's cast and crew built the 110 bat houses out of the movie's set as a way to support the nonprofit and its work to save bats. While engaged in the project, cast and crew also made a short PSA documenting the project and the need to protect the animals, available here. All proceeds from the auction and sale of the bat houses will go toward the care and feeding of the 200+ animals that form the core of the organization's education efforts.

According to Rob Mies, Executive Director of the Organization for Bat Conservation, the generosity shown by Zack and the cast and crew was enormous. "Zack contacted us after hearing about the devastation that is happening to bat populations across North America and wanted to do something. They took time out of their busy schedules to bring real attention to an animal that is in desperate need of support. With their help, we are able to reach millions of people about the need for bat conservation."

Bats play a key role in maintaining the health of ecosystems around the world by consuming insects, pollinating plants and dispersing seeds. In North America, most bats are insect-eaters, saving farmers billions of dollars in pesticides and backyard gardens from pests. Bats are currently under threat from a number of sources, most notably White-nose Syndrome, an invasive fungus that is rapidly spreading across North America, decimating bat populations. To date, there is no treatment for White-nose Syndrome; however, scientists are actively testing possible options.

Bat houses provide healthy, safe homes for bats to raise their pups. Bat houses also provide alternatives to living in human buildings. While not a direct treatment for White-nose Syndrome, bat houses are a critical element of a beneficial habitat for bats. Bat houses as part of this auction and sale can be used either as functional bat houses or as collector items.

ABOUT THE ORGANIZATION FOR BAT CONSERVATION

The Organization for Bat Conservation (OBC) is an environmental education nonprofit dedicated to educating and inspiring people to actively save bats. Founded in 1997, OBC is committed to inspiring people to become active in the conservation movement. Each year, the organization reaches hundreds of thousands of people through its national Save the Bats campaign, traveling live animal programs, exhibits, festivals and Bat Zone tours. At its home base at the Bat Zone at Cranbrook Institute of Science in Michigan, OBC cares for more than 200 bats from around the world. To learn more, visit www.batconservation.org.