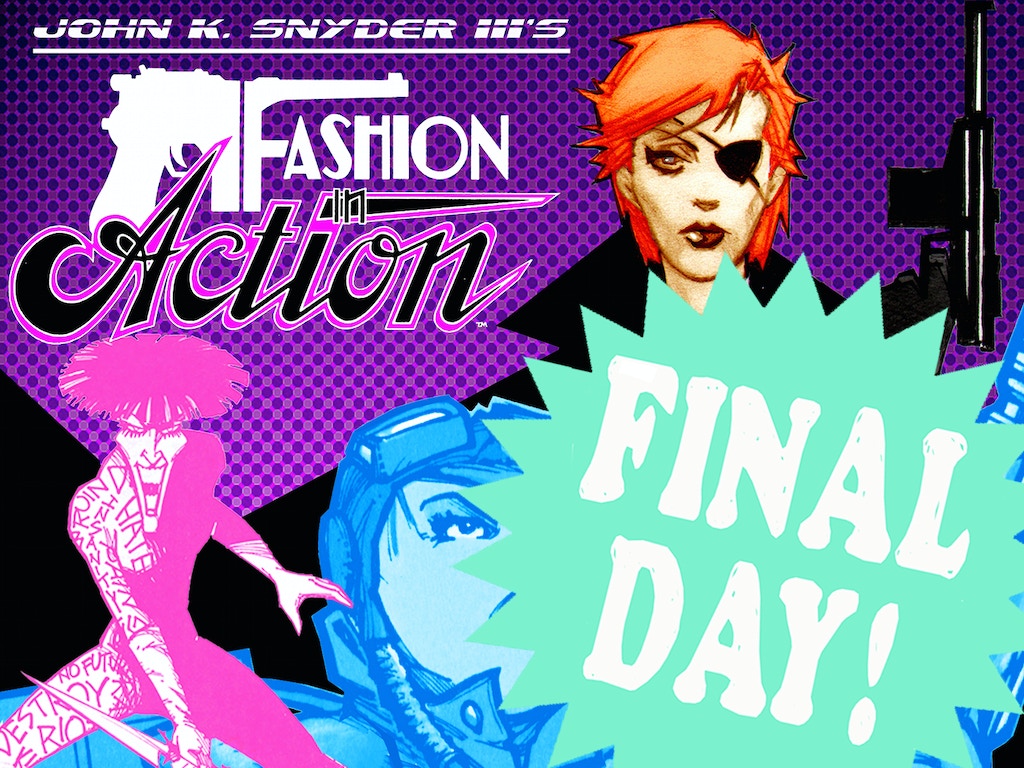 Local cartoonist John K. Snyder III has a Kickstarter campaign to reprint his 1980s comic book Fashion in Action. I've just backed it and encourage our readers to do so as well. John can regularly be met at Baltimore Comic-Con.

This project is a restoration and reprinting of the 1980s series FASHION IN ACTION created by John K Snyder III. This comic starred a high-priced, and stylishly dressed, all-female protection agency and was set in the far future. It was an intriguing breath of fresh air that was a prime example of the best in 1980s independent comic storytelling!

It's the year 2086, and the 2080s haven't changed much from the 1980s - except of course for the jetpacks, Mars colonizations, and rocket-fueled cars. Frances Knight and her squad are "the world's highest priced and best dressed celebrity protection agency." They guard the world's rich and beautiful and make their base in the refurbished Statue of Liberty.

Fashion In Action square off against the diabolical team of the coldly manipulative Dr. Cruel, and his accomplices, Boss One - a henchman just happy to be involved - and the violently unpredictable Roxanne, Frances Knights' most psychotically devoted fan. Dr. Cruel plots to use the robot clone of a late night talk show host to turn the world's elite into gorillas during a snuff star's celebrity-filled wedding! Will they succeed? Will Frances defeat Roxanne? And will they look absolutely amazing doing so? Fund this project and find out!

Back in 1985, I set out to create an entertaining series that would reflect the times we were then living in by projecting it onto a futuristic society where the cult of celebrity and personality would become the status quo. It only seemed natural at the time to cast a group of strong-willed women as a symbol of reason and security in the middle of an ego-driven world full of social and political unrest. It was a creatively rewarding experience that was born out of the height of the creator-owned alternative market of the early/mid-80’s, but was a short-lived series that I have always hoped for the opportunity to re-introduce and return to and continue.

It is a pleasure to invite you to join Hope and I in bringing the Women and World of FASHION IN ACTION back to the twenty-first century, where they have always belonged.
Posted by Mike Rhode at 7:00 PM