Local Cartoonist Steve Conley Kickstarts his BLOOP Webcomic Graphic Novel
Eisner and Harvey Award nominee, and Eagle Award winner Steve Conley is launching a Kickstarter campaign to help produce the first print collection of his webcomic graphic novel BLOOP.
http://www.kickstarter.com/projects/steveconley/bloop-part-one-deluxe-oversized-hardcover
BLOOP is the story of a little green space monkey who is looking to find the perfect tree. Along the way, he makes some friends and finds that not only his tree, but the entire planet, is threatened by a corporation bent on tearing the world apart.
This BLOOP collection will showcase the first chapter of the story and will be a giant 10 inches x 15 inches. The book will have a case-bound, hardback cover with a golden foil stamp and a full-color, wraparound dust jacket. The interior will be 28-pages of full-color printing on thicker, 100# satin text paper.
"I've been doing the webcomic thing for a long while and I think crowd funding is the tool independent creators have been missing," Steve said, "Readers get to read comics like BLOOP for free online and - if they really dig the story or art or if they just want to support the project - they can get a personalized, deluxe edition that gives them an experience they can't get from their PC or iPad."
For readers new to crowd funding and Kickstarter, the concept is simple and a lot of fun. Readers pledge a certain dollar amount on the project's Kickstarter page and different pledge amounts earn contributors different rewards. Contributors help make the project happen and get cool stuff in return.
The Kickstarter campaign features a variety of rewards including a set of reto-futuristic poster prints and postcards created by Steve as set decoration in the story.  The main reward, of course, is the book itself which. The top rewards are the original pages of comics art used for creating the story and the book's wraparound cover. This is the first time the original art will be available to buy and I've held on to them specifically for this campaign."
Steve has lived in Northern Virginia for the past 20 years and has been closely involved with the local cartooning and comics community. Steve was a volunteer with SPX, the Small Press Expo, for over a decade serving as Executive Director in 2004 and 2005. Steve has also been a contributor to the Baltimore Comic-Con since its inception. In 2007, Steve wrote and drew the DC-based political comic strip "Socks and Barney" through Election day 2008. Most recently, Steve contributed to the Team Cul de Sac project, celebrating Richard Thompson's brilliant comic strip Cul de Sac, and he contributed a page to the latest issue of Washington D.C.'s independent comics newspaper Magic Bullet.

It was a long road to BLOOP. "I started working on BLOOP ten years ago and each time I sat down to work on it, I felt like my drawing skills just weren't up to the task. Every time I drew that little space monkey, something wasn't quite right. After nearly a decade of sketching and practicing, one day, he just snapped into place. I feel like I finally have all the ingredients I need to do it right."
The Kickstarter launches August 14 at 2pm ET and will run until September 17.
The KICKSTARTER URL:
http://www.kickstarter.com/projects/steveconley/bloop-part-one-deluxe-oversized-hardcover
THE BLOOP WEB SITE:
http://bloopstree.com/
BLOOP ON FACEBOOK:
http://www.facebook.com/bloop.the.space.monkey
Attached are three pieces of art.
-- The wraparound cover for BLOOP: Part 1
-- The four retro-futuristic posters
-- The Kickstarter cover image 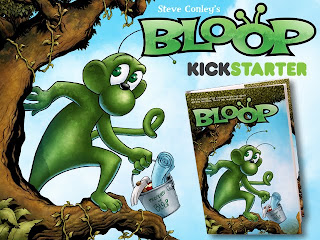 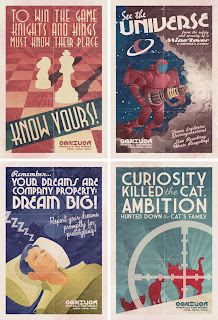