I was looking at this article tonight:

and took a closer look at the image promoting it: 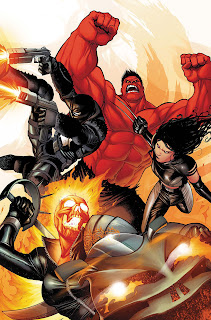 Every one of these characters is derivative of a pre-existing and still existing character, and to top it off, these are less pleasant versions. Marvel is now like 1955 DC which had a Superman, Supergirl, Batman, Batdog, Batwoman, Batgirl, Superhorse (Comet), Supercat (Streaky), etc, etc, except they might be murderers or psychopaths.

In this picture is Red Hulk - one of five current Hulks, I think (if you count Hulk's son Skaar) - two male and two female. Given that I thought it was the GREEN gamma radiation that gave the Hulk, She-Hulk, Leader, Abomination etc their powers, I have no idea what Red means.

Venom, was derived from Spider-Man, albeit around two looong decades ago. Spider-Man got a symbiotic black suit that had the same powers he had, and could look like any type of clothes he wanted. It turned evil of course. Venom's the one with the guns, because you know, a suit that can mimic Spider-Man's powers isn't enough. Recently every other person on Manhattan supposedly had Spider-Man's powers. Uh-huh -- they're that special. And another Spider-Man clone is about to be running around as the second Scarlet Spider.

X-23 is the third Wolverine derivative, although her own comic just got cancelled.

And Ghost Rider is a woman now? Who knows, but there's two predecessors there as well, and Johnny Blaze the first one of them is still floating around the Marvel universe. Perhaps like the new female Red Skull (the first one's daughter), someone finds something sexy about a faceless skull-headed woman? If so, I don't want to think about that any more.

DC's not any better either. Harking back to the 1950s, in Grant Morrison's Batman Inc. each country has a Batman, there's no longer just a Green Lantern Corps, but also a Red, Black, Indigo, Orange and Pink set, a multitude of Firestorms, and who knows how many relatives that Superman "the last son of Krypton" has floating around now... Unmentioned so far are Marvel's multiple versions of the Avengers (four teams I think) and the X-Men (also four maybe?).

I'm hearing The Who's New Song as a comic book soundtrack much too often these days.


This post from yesterday touches on another aspect of derivative superhero stories. I track these articles for my Comics Research Bibliography.
Posted by Mike Rhode at 9:08 PM

I think there are actually 7 Hulks: the original, the Red Hulk, Skaar, Abomination, Rick Jones was transformed into an armadillo-looking blue Hulk named (I think) A-Bomb, and the two women. To make matters worse the Red Hulk is Thunderbolt Ross and the Red female Hulk is Betty Ross (apparently both brought back from the dead). BTW you could have mentioned that too. The killing of heroes only to have them pop up later, miraculously restored. Johnny Storm for example did die but was brought back to life several times in the Negative Zone - a little cheat there. A little cheat with Bucky too - twice now. He was seemingly dead in the Fear Itself story line only to have survived in another book. Stories like this make it difficult to invest anything emotionally in these stories since we expect it to be a waste of our time. If they'd permanently kill off some characters or actually have "big" events that have a continuing effect on the characters and their world then perhaps it'd be easier to invest ourselves in the stories. Also you left out the Yellow and Blue Lanterns.

The real question is: Why did you read Superhero cmics to start with? :-)