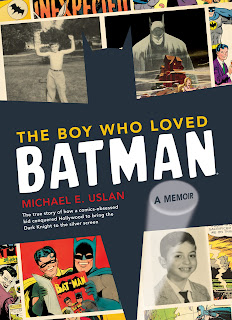 I'll post the link when it appears, but I did a 45-minute telephone interview with the Batman movie producer, which touched on his new autobiography, his writing for Archie comics, and of course, on Batman:
Michael Uslan: Yeah, The Boy Who Loved Batman is about the boy who loved Batman, the ultimate fanboy geek who learned to read from comics before he was four, and the adventures and misadventures I had collecting comics, going to the world's first comics convention ever held, becoming an early member of comics fandom, finding a way to incorporate my love of comic books and superheroes, in particular Batman, into my work and life with my attempt to restore dignity to Batman after the tv show and finding the ways for a blue-collar kid from New Jersey to make it to Hollywood to show them the potential of dark and serious Batman movies, even though I didn't come from money, and couldn't buy my way into Hollywood. I didn't know anyone and didn't have any relatives in the business, so it's really my story of a life's journey of what you can do to make your dreams come true – for me I was able to pull it off ultimately.

He'll be appearing on Thurs, Dec 8th in Silver Spring at the Discovery building.
Posted by Mike Rhode at 3:35 PM