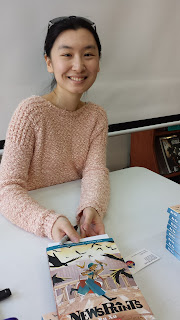 Webcomics cartoonist Ru Xu has a News Prints new graphic novel out from Scholastic's Graphix imprint.  She was at Fantom Comics on Dupont Circle yesterday and I'm sure they still have signed copies.

The book is the start of a steampunk series about a young girl who pretends to be a boy to sell newspapers on the street after her family is killed in an ongoing war. She falls in with a crazed inventor and then gets involved with high-level hijinks about the conduct of the war, and also has to contend with what journalism and truth really mean.

The art is heavily-manga influenced, and I liked it quite a bit. Ms. Xu told me that one of her influences for this book is Miyazaki and one can certainly see that. She's working on the next book in the series now. Her webcomic, Saint for Rent is here.

Recommended for tweens (and aging men who like Miyazaki) 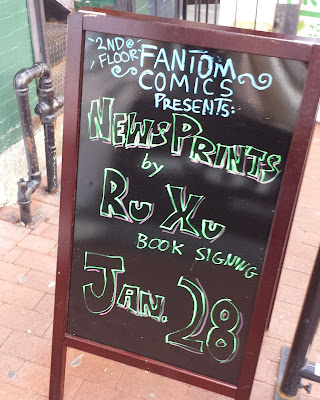 Posted by Mike Rhode at 1:04 PM No comments:

This little ad at the bottom of an edition of the Examiner led me to Port Discovery, Baltimore's children's museum and the traveling exhibit based on the cartoon Robots which is there from May 24-September 8. Here's their description:

Robots: The Interactive Exhibition is a one-of-a-kind exhibit that features characters from the blockbuster movie "ROBOTS." Each of the characters introduces children to the exciting and wondrous world of robotics through more than 15 interactive and hands-on experiences.

Embodying the spirit of technology and imagination, this exhibit is designed to engage, entertain, and enlighten visitors to the ever-changing field of science.

I enjoyed the cartoon, which I don't think did great at the box office. It had design work by William Joyce whom I always like.
Posted by Mike Rhode at 9:48 PM No comments: