"Who are the new superwomen of the universe?" - the morning after

Thanks to the courtesy of the National Museum of Women in the Arts, I was invited to attend this panel last night.

The Museum described it as:

FRESH TALK: Who are the new superwomen of the universe?

Join us for FRESH TALK on the superwomen changing the universe of comics and beyond.
For much of comics history, women characters were introduced as plot devices for the leading male characters. Join us for a conversation about the new wave of superheroines entering the comic universe, leading the fight for justice and dispelling traditional stereotypes in fiction and beyond.
Followed by Catalyst, a cocktail hour with a topic and a twist.

Moderated by Emily Whitten, ComicMix.com writer and moderator of Awesome Con. Emily is based in Washington, D.C.

DC Zine Fest reps, including my neighbor Anna Tecson, set up in the lobby before and after the show. The main event, in the Museum's 5th floor auditorium appeared to be sold-out. The crowed was probably 90% women. After a two introductions by museum staff, the panel began, slightly late due to Metro delays.

Carolyn Cocca gave an academic overview of the problems with women in superhero comics over a fifty-year period, including helplessness, cheesecake, under-representation, and 'fridging' or abuse to highlight a male superhero's feelings. While she spoke in a very academic fashion, she got her point across especially with her visuals, and I'll be looking for her book. 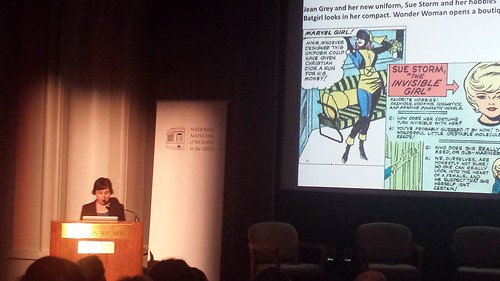 Ariell Johnson gave a very entertaining account of her decision to open a 'safe-space' comic book and coffee shop in Philadelphia. 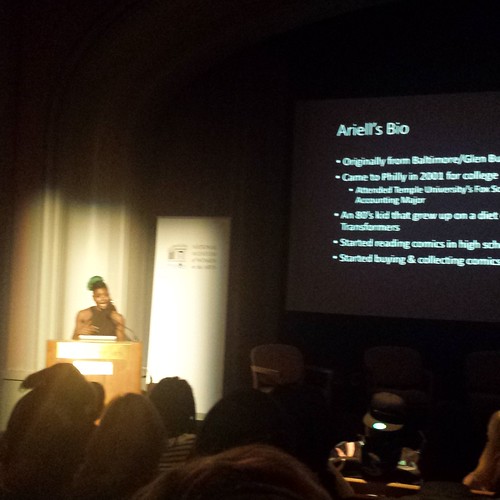 Gabby Rivera had one young adult novel published when Marvel Comics sought her out to write a Puerto Rican, lesbian hero named America. Rivera was irrepressible during her talk, and I plan on following her career. 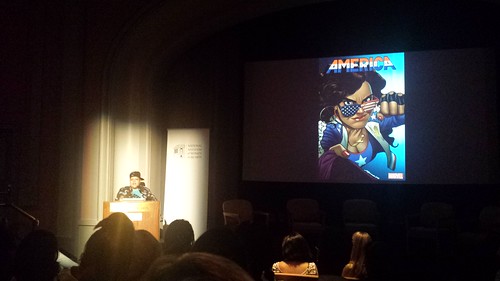 Ashley Woods talked about growing up in Chicago and discovering comics via a convention that she attended with her mother, and then self-publishing a comic through college, until finally landing the Niobe title. Her art is anime/manga-influenced and now done digitally, but she talked briefly about not being able to afford computer tools earlier in her career. 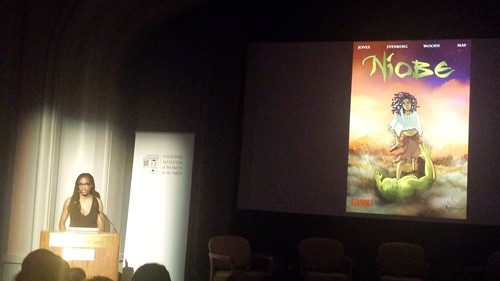 The talks ran a bit long, so the panel session was short and mostly taken up with the panelist's impressions of the Wonder Woman movie (which were generally positive). Everyone agreed that there should be more non-white-male work and representation in comic books. After the panel, there was a cocktail party in the main lobby, but unfortunately I had to leave at that point. 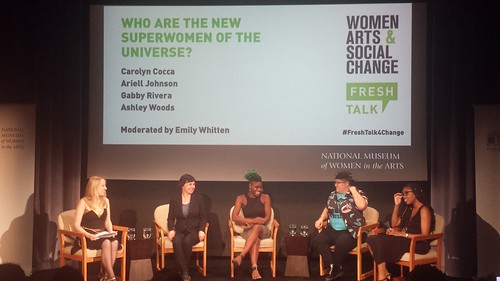 The panel was recorded and should appear online soon.

Email ThisBlogThis!Share to TwitterShare to FacebookShare to Pinterest
Labels: comic books, National Museum of Women in the Arts

June 14: FRESH TALK: Who are the new superwomen of the universe? (with discount)

Email ThisBlogThis!Share to TwitterShare to FacebookShare to Pinterest
Labels: National Museum of Women in the Arts, UPCOMING EVENT

The National Museum of Women in the Arts on Wednesday will host a free lunchtime chat about its popular Audrey Niffenegger exhibition.

"Digital Media Specialist Laura Hoffman discusses selections from Awake in the Dream World: The Art of Audrey Niffenegger," according to the museum's website. "The gallery talk will cover the mid-career retrospective of Niffenegger, featuring her book art, works on paper, and paintings with a specific focus on the more morbid works in the exhibition. Discover a fantastic, strange, and mysterious world created by the artist and bestselling author of The Time Traveler’s Wife and Her Fearful Symmetry. The talk and exhibition will reflect Niffenegger’s captivating narrative talent as well as her spooky yet humorous portrayal of death."
Posted by Matt Dembicki at 11:56 AM No comments: