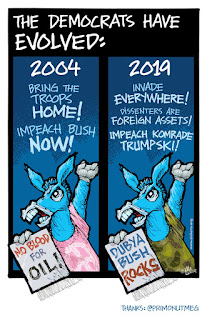 So, just to recap all the pants-crapping over Hillary Clinton's smears of Democratic White House Wannabe Tulsi Gabbard:

- Hilldawg crawls out of woods to fling smears alleging sinister Russian influence over Tulsi Gabbard candidacy.
- Defenders rightly speak out against fresh round of baseless McCarthyist smears, citing Rep. Gabbard's service in Iraq: "How dare you smear this glorious hero who defended our nation?"

This whole mass aneurysm illustrates the extent that the Democratic Party has shifted in the past ten, fifteen years — from howling about US involvement in Iraq and "endless war" to stanning a politician who brags about her "service" in a war based on lies which killed nearly a
million people. Their whole response centers around smarmy "thank you for your service" babbling, dispensing with any discussion of the ethics of the Iraq war and rehabbing George W. Bush on the Ellen DeGeneres Show.

As one wag on Twitter put it, the US antiwar movement has shrunk to "atomic size".