I was recently in Rome on vacation. As I usually do when I'm in a foreign country, I sought out local comic book shops, just because I find it interesting to see how other people sell my favorite medium. This time around, I went to two shops.

Originally, I was looking for a comic book shop in the neighborhood behind the Vatican. I wasn't able to find it, though. In the course of my quest, I went into a GameStop and asked for a recommendation. The neckbeard customer in the store pointed out that his local comic shop was right around the corner. This led me to StarShopRoma. This was the Scipioni branch of the shop, which makes sense. It absolutely felt like a outpost shop that exists to serve the people in the neighborhood. 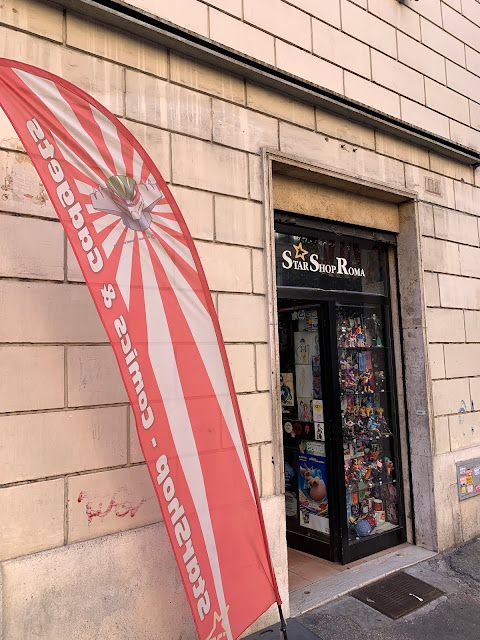 The neighborhood is right next to the Vatican and is full of massive, block-length buildings. Small retail establishments like this are scattered all over the street level of the neighborhood, seemingly at random. In my experience, one of the things that mainstream nerd culture shops like to do is customize their exterior displays. The way that the building was constructed gave them very little room, but they made the most of what they had. Europeans are used to working with limited space. 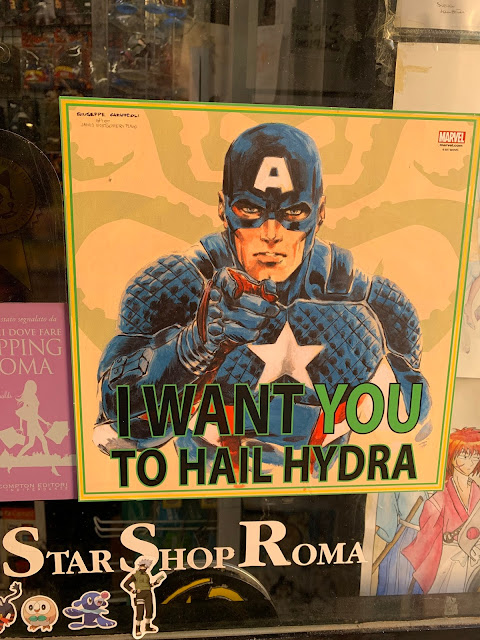 There was a fantastic assortment of original art in the entryway. 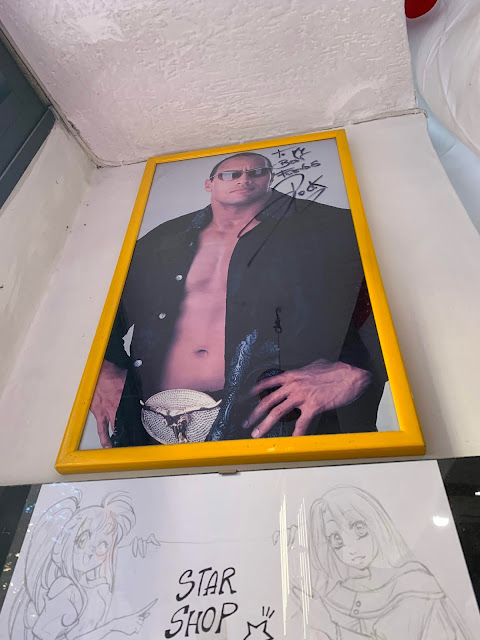 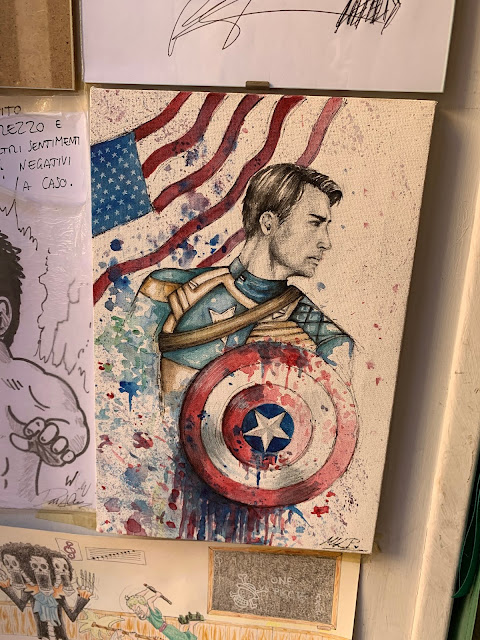 The interior of the space was tightly packed with very little room unused. Every shelf was stacked to the extra-high ceiling with boxes of statues and figures. Manga was, by far, the dominant comics format for sale. 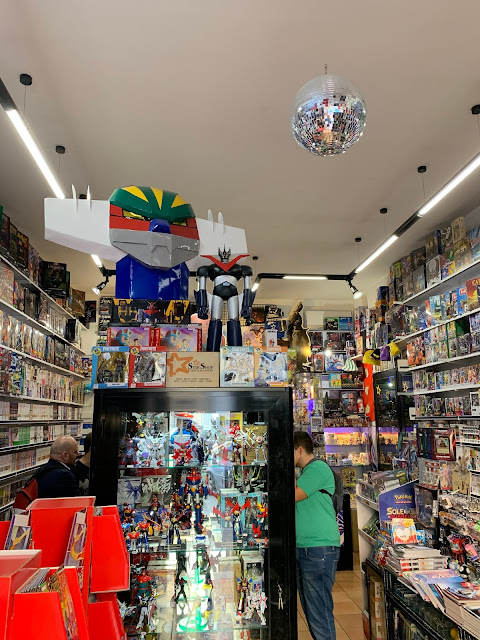 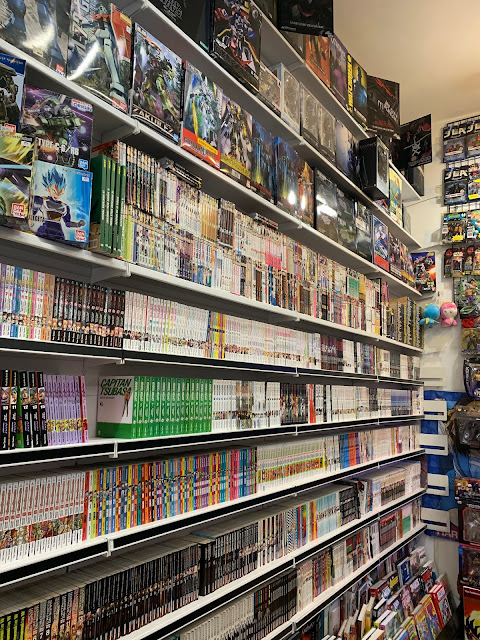 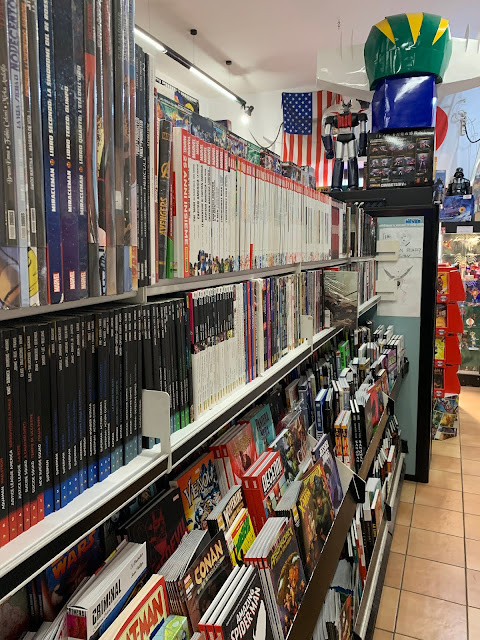 There was a wall of American superhero comics and a rather limited shelf of translations of American alt-comics alongside BD from French publishers, but even that was sparse. There was a set of deluxe Corto Maltese volumes, but that was the extent of historical Italian comics creators that I am aware of - no Manara, for example. I did find a copy of Box Brown's new book when I did some digging. 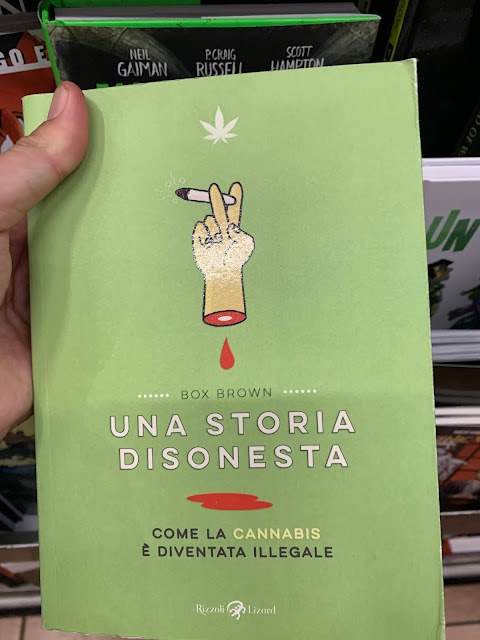 It's right next to a major tourist attraction, and the cafes in the area are poised to handle the overflow from people looking for a place to sit down. This shop doesn't care about any of that. It sells what it knows to a dedicated audience. By and large, that audience is men with a certain taste in pop culture. It's exactly the kind of comic store that would be frequented by a guy hanging out in a GameStop in the middle of the day on a Friday. It's a local, male, otaku shop.

I ran into the other shop almost by accident. I was retracing my steps along the Tiber and past the Pantheon when I found myself on a major road bordering a neighborhood with a number of tourist friendly boutiques. I walked by the Fox Gallery and spotted the comics-related material in the windows. Intrigued, I went in and was very surprised by what I found. 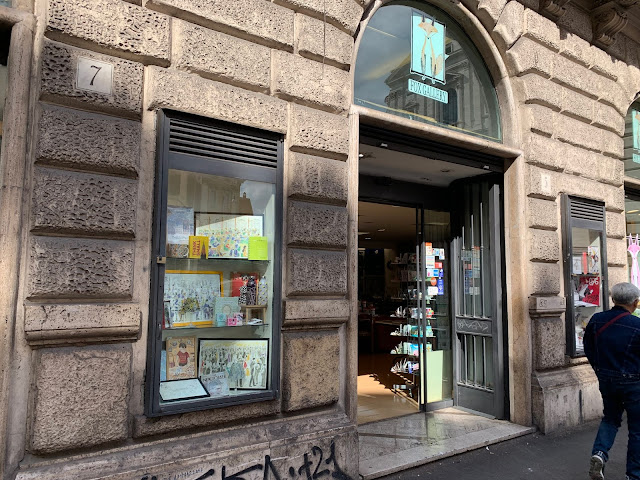 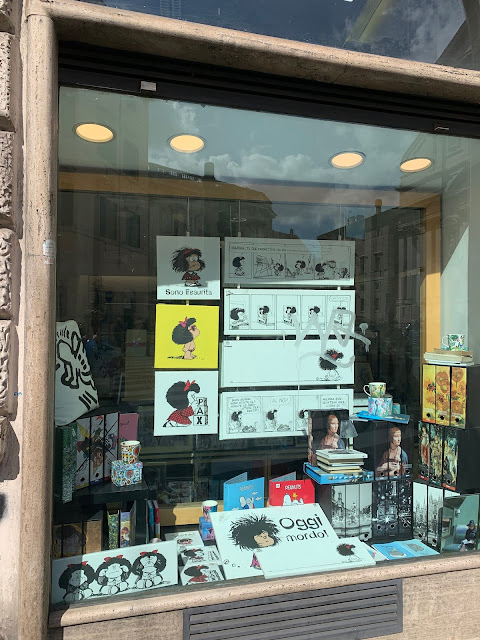 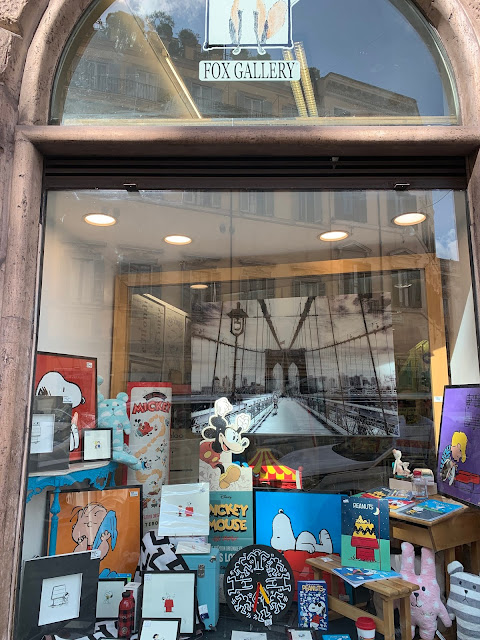 The store is laid out like the kind of mainstream boutique that sells blank notebooks and coffee table books full of maps or artist retrospectives. It just so happens that the material on offer what almost all comics-related. There was a very well-curated selection of comics prominently displayed on a table as I walked in, and a much larger library in the adjoining room. Some of them were even in English, which indicated that the target audience might just as well include tourist women who wanted an offbeat souvenir from their trip to Rome. 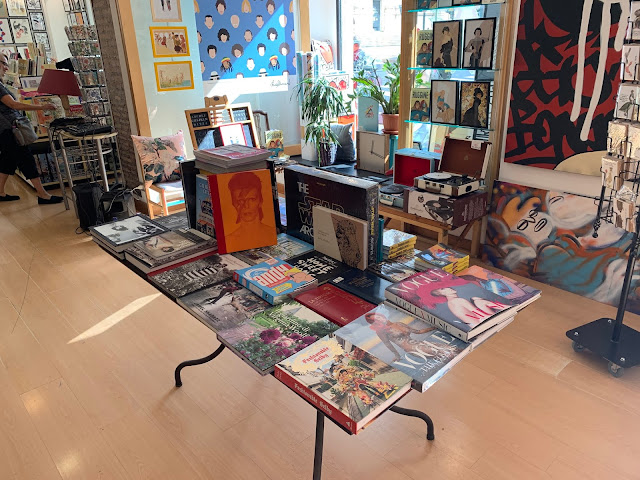 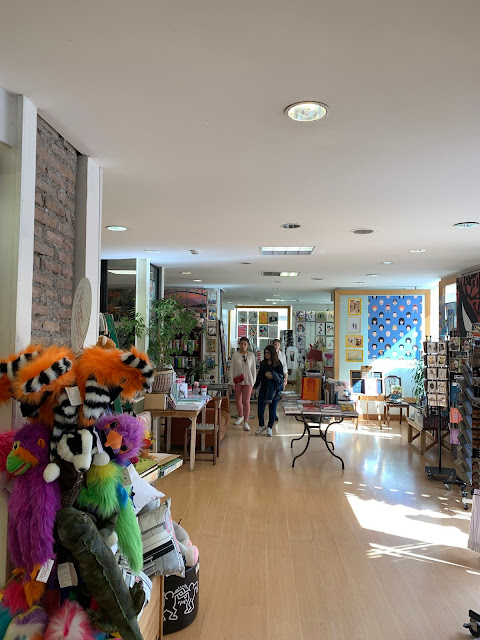 This store looks like every mainstream boutique aimed at the profitable female tourist demographic I've ever been in, anywhere in Europe or the United States. Bright, airy, well-organized, calm, casually attractive. It's deep in the heart of tourist territory - on the walking path between the Pantheon and the cluster of Roman ruins around the various forums. And there are a ton of people walking along the street that it sits on, many of whom would need very little reason to duck in and see what's for sale. And the subject matter makes it more likely that a tourist husband might be talked into going inside. 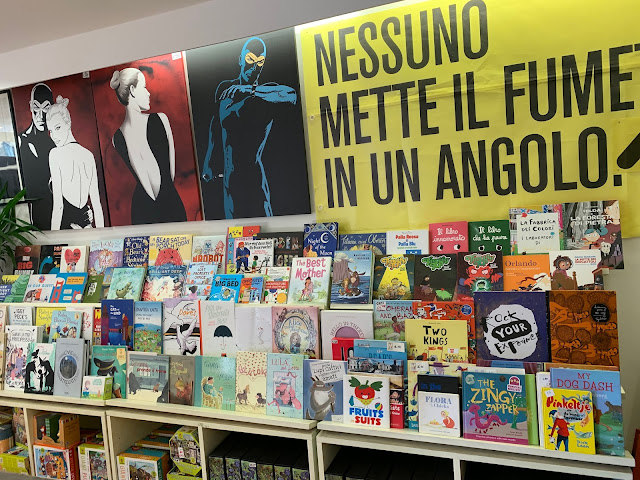 The selection of comics is pretty basic. But at the same time, the presentation isn't cluttered or packed or frenetic. There's a lot of room for the titles to breathe and appeal to the casual browser. There was even a place for the little ones to relax while the family browsed. The actual material was all over the place - much more European material, almost no Manga, and some mid-tier American comics. By and large, the choices seemed oriented around whether the books were attractive as art objects. 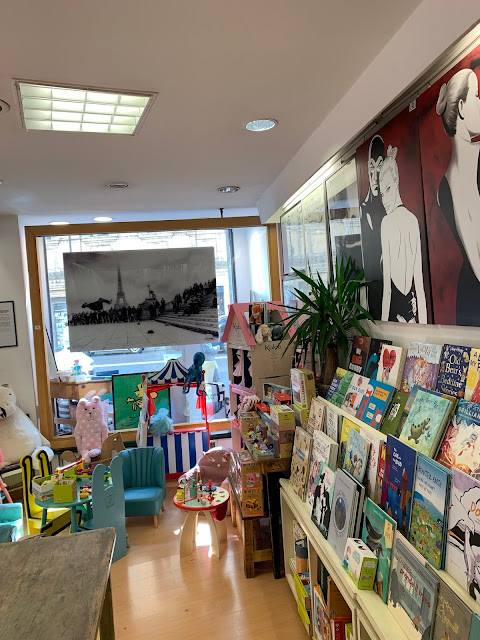 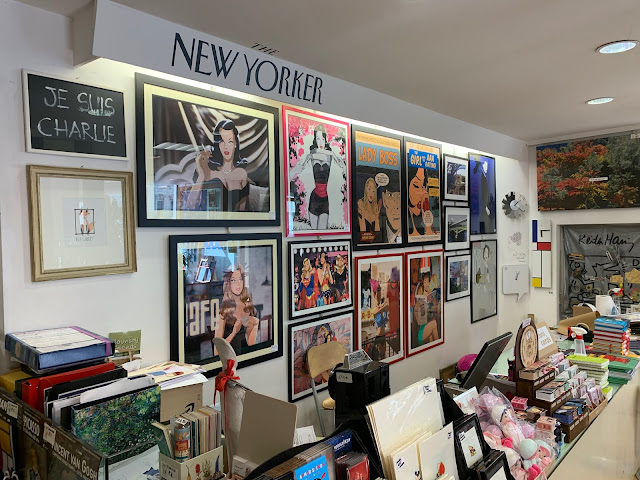 The compare and contrast between the two stores and their respective target audiences, approach to presentation, and material on offer started almost immediately. One was a cramped little garret designed to meet the specific needs of regular customers. The other was designed to appeal to tourists, treating international comics as coffee table books. To be fair - the Andy Warhol book by Typex feels like it could very easily be a coffee table book.

Before I left for Rome, I did a quick search for local comic book shops and there were no results in the parts of the city that I ended up walking through. Neither of these shops showed up, for example. Mind you, it was a rough search and I did not really put a lot of effort into deep research because I only had two days on the ground and I really wanted to see Trajan's Column.

Of the two, I was almost completely unsurprised by StarShop. It felt like every nerd outpost I've ever wandered into, pretty much everywhere I've been in over half-a-dozen countries. The only real shock was how much manga there was and how few translations of French BD there were. I chalk that up to this being an outpost, but it is a pretty good barometer as to what's selling to this audience. Basically, this is not where you come to buy European comics. The fact that there was such a stark divide in audiences is notable.

Fox Gallery, on the other hand, took me completely by surprise - literally. I just stumbled on it as I was walking down the street. I immediately recognized the boutique commercial format - I've been in a ton of these over the course of the past two decades. However, I have never been in one that leaned so heavily on comic books as the primary thematic merchandise - especially targeted at tourists. That felt revolutionary.

__________________________________________________________Why is this here? It's a long story. Mike Rhode first introduced himself to me when I first started vending at SPX. Over the years, we've talk to each other at Comic conventions around the DC area and never quite get around to sitting down for lunch.
When I moved to Arlington two years ago, I didn't realize that Mike lived within a mile of my building. Nor did I realize that he lived next door to my ex-girlfriend's friend from college. We also discovered, by accident that we work two buildings away from each other, because we work in adjacent organizations. The world is a very small place, sometimes.
It really feels that way when I run into Mike at the local farmer's market. Naturally, that's when I pitch him article ideas. I'm reading the entire run of Heavy Metal in public (in blog format) because I happen to own the entire run of Heavy Metal. This means that I'm engaged in an ongoing study of the magazine. In addition, I have a diverse and idiosyncratic reading list that tends towards the weird corners of comics history. Sometimes one circumstance or another results in long articles that I don't really have anyplace to put. Mike has been gracious enough to let me publish them here.
In summary: this is an article about comics from someone in the DC area.
Posted by oletheros at 6:02 PM