Meet a Local Cartoonist: A Chat with Kathleen Brenowitz 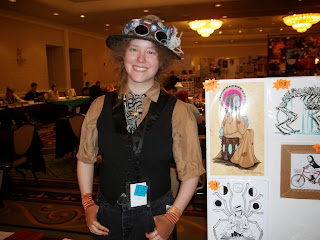 Kathleen Brenowitz was at this fall's Intervention con in Rockville displaying her work. She kindly answered my standard interview questions (all images except the photo are from Kathleen's websites).

Kathleen Brenowitz: I'm a pen-and-ink illustrator who writes and draws my
own comics, along with taking commissions for illustrations.

Dip-pens with acrylic ink and sometimes watercolors are my usual tools of choice. Something about the scratching tremors I can feel up my hand and the smooth glide of ink is really very calming? I'm usually a ball of energy bouncing around but I like how traditional inking and painting allows me to still myself and focus. I've started experimenting with digital coloring though - I love the broad, even expanses of color you can get with digital, so experimenting has been fun!

I'm actually more towards Baltimore, up in Towson. I went to Goucher College and still have friends in the area, plus the rent's cheaper around here. I've been enjoying my time here though!

My mother's old college pals from her art school days are still close friends of the family, and taught me drawing tricks when I was younger, but for the most part I'm self -taught. I did take some classes in high school and college – life drawing (so useful!) - but I eneded up majoring in communications with an interest in film. I think film has aided me in telling stories more visually, and using panels as camera shots. A bit of an odd mix for drawing – Aubrey Beardsley for his clean and sensual linework, Herge for his Tintin comics with their hyper-detail and lovely panel layouts, and Mobius for his beautifully weird designs. Writing is harder to track, since I devour books; I'd say Mr. Asimov had a hand in my love of sci-fi, along with Douglas Adams and Terry Pratchett for warping my sense of humor at a young age.

I'm just starting out but...I think I would have tried to get up my webcomic while I was still in college? Would have been nice to have that underway when I graduated so I had some more momentum.

My black-and-white inks and insane amounts of detail. If I had to describe my style for writing and drawing, I'd have to say 'fiddly'.

Right now the first issue of my comic series, Pertho. It's called High Hopes and I think it turned out rather
well!

I'd love to have more published works under my belt, along with completing a visual novel.

Sometimes I run errands on my bike – the movement helps to clear my head and remove any excess nervous energy that might be blocking me. Or at other times I try to get some new imput buy going to a museum or listening to a new band a friend recommends. You can't give good output without some input, and I've found usually writer's block is simply that I'm running myself dry.

I have no idea – and that's what makes it so much fun :D

I went to Okatcon two times, but I've never been a major con person ; never really had the extra money to spend. But I enjoyed my time at Intervention - this was actually my first time tabling at a con and it couldn't have been more enjoyable! I'm going to be visiting SPX for the first time this year as well, as an attendee :)

The museums! I still haven't seen all of the National Gallery and I probably never will – it's just that big.

Well, I'd like it if the mass transit system got some more upkeep. The Metro might look straight out of 1960s French sci-fi, but both it and the buses could use some love.

I love the Freer Gallery – it's an oddly intimate gallery, being that it was all one person's taste that collected the pieces. I love taking people through it and seeing if they get that feeling as well, of walking through another person's thought patterns made manifest in their taste.

Sushi Hana, up here in Towson? Order the fire salmon with a side order of avocado sashmi – it's delicate slices of salmon that have been lightly seared. When you place one in your mouth you can feel them softly melt, the texture a perfect blend of resistance and submission – like a truffle of savory oils. Combine with the avocado, and the flavours of both are perfectly complemented, the avacodo carrying the salmon's inner sweetness but providing perfect contrast for the fish's outer shell of cooked flesh. Seriously, buy it and savor it – it's utterly delicious.

Yup! I have an 'official' site at www.ksbrenowitz.weebly.com and a tumblr at www.puzzlinghappenstance.tumblr.com
Posted by Mike Rhode at 12:55 PM