Can Buzzboy Conquer the "Dynamic Trio" of iTunes, the Internet, and Print Publishing? 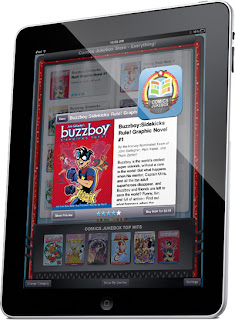 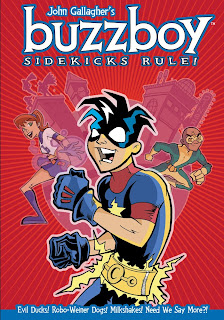 Cartoonist John Gallagher announced the release of his graphic novel, Buzzboy: Sidekicks Rule, through three publishers in three different formats. The humorous story of a tween super-sidekick, Buzzboy is being released as a new webcomic at Keenspot.com, in print through through Red Giant Entertainment, and as a digital comic in Gallagher's own "Comics Jukebox " iTunes app.

Buzzboy,  a kid-friendly tale of a milkshake loving, diner dwelling sidekick, who must save the world when all the adult heroes disappear,  was created as an answer to the dark, gritty comics that seem to dominate the comics marketplace. "I've always focused on creating comics that everyone can enjoy," said Gallagher, "and this lets me reach out to people other than the average comic book fan—essentially, the 200 million people who aren't going into comics shops." Comic books are an integral part of pop culture, but have had trouble at times attracting new fans, especially young readers.

"As the father of three kids," says Gallagher, "I found that my children were just as likely to read on an iPad as play a game or watch a show. That's why an app is part of the plan." Comics Jukebox, created with fellow cartoonist and friend Steve Conley, offers free and affordable kid-friendly comics on the iPad, including Buzzboy and other all-ages comics. "Jukebox" has already been downloaded thousands of times, and a version for the Android market is in the works, and they are currently prepping for the e-book market.

Although some say print sales could be hurt by the web and digital releases, Gallagher sees it as all part of a new, organic relationship across all media. "I read Calvin and Hobbes every day in the newspaper when it was originally ran, but that didn't stop me from purchasing collections of the comics in the bookstore," said Gallagher. "I don't think today's audience cares where the story is told, be it on the web, in a book, or on the side of a building—as long as it is where they want to read it."

Buzzboy: Sidekicks Rule is is available to read on Mondays, Wednesdays & Fridays at http://buzzboy.keenspot.com, on iTunes through Comics Jukebox, and is headed to all comics shops, Barnes & Noble, and Amazon.com in early December.