I saw the Bush Leaguers exhibit at the Katzen today, prefatory to reviewing it for the International Journal of Comic Art. It's an amazingly large exhibit, and a good one. The space is awkward, as you can tell from these pics, but there were some real good cartoons here and you could get up close to see the technique. 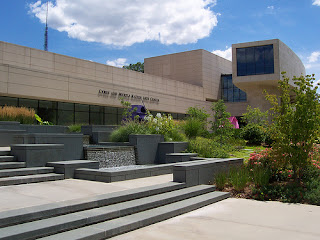 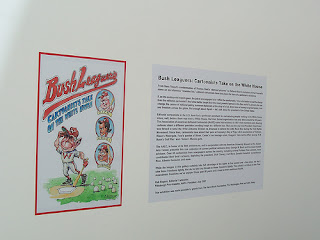 As you can tell by the above photo, Matt Wuerker did an introductory image, and AAEC President Rob Rogers wrote an introduction (and the only text) to the show. 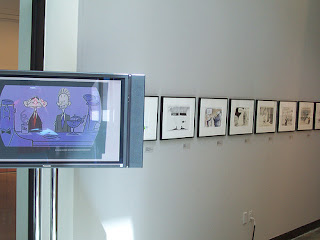 The exibit opened with videos including KAL, Fiore and Telnaes, and then went into an overwhelming amount of print cartoons. Many of these images were now 'born-digital' as librarians like to say. It does raise a question about what original art is. 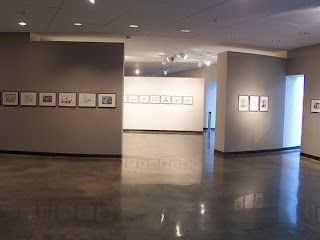 Tom Toles's "Battle Hardened" cartoon that provoked a letter from the DOD's Joint Chiefs of Staff is on display.

Good cartoonists not as well known in DC like Mike Jenkins of the Journal can be seen. His "Heartbeat Away" showed Bush playing with toys and worrying about being President when told that Cheney was having heart problems. Ed Stein of Denver drew "Band of Brothers" showing the GOP's 2004 team of Bush, Cheney and others, noting "They all weren't in Vietnam together."

Other viewers in the exhibit, of which I think I saw 3 sets, were laughing out loud.

Some memorable cartoons were VC Roger's "Iraq War Memorial," a play on the W in George W. Bush and the Vietnam War Memorial in DC was great. Mike Luckovich's "Apple-Bobbing at the Cheneys" showed Cheney holding a kid underwater in a tub while saying 'Confess!' Matt Davies' "The Concert Pianist" had Rice playing a 'White House Foreign Policy' piano that only had one key. JD Crowe's "Rumsfeld Steps Down" used the trope of flag-draped coffins, and had Rumsfeld as a blind man stepping down a long, long stairway of them. It was a lovely drawing even if the flag-draped coffin was declared to be overused at the recent AAEC convention.

Iraq, Cheney, wiretapping, and civil liberties were generally the topics. There were only two cartoons on Hurricane Katrina's destruction of New Orleans.

In a mis-step, two cartoons of Bush as a Roman Emperor were mounted together. The cartoons by Stuart Calsun and Steve Greenberg were both fine, but didn't benefit from being shown side-by-side.

Two had comics-references in them. Daryl Cagle used the Robert Crumb cover of Zap #1, drawing George Bush getting the show in "Surge in Iraq." It was a good drawing, but I wonder how many people got the reference. Tom Stiglitch went wider and drew George Bush as Charlie Brown leaning on the sad Christmas tree with a broken ornament labelled Iraq in "A George Bush Christmas".

Overall, this was a good show, and would make a neat fundraiser for the AAEC which could use the print-on-demand technology mentioned in the next article to do it.
Posted by Mike Rhode at 9:46 PM