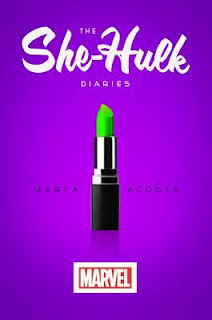 Along with Rogue Touch, The She-Hulk Diaries by Marta Acosta (Hyperion, $15) is Marvel Comics' latest experiment in reaching a new audience. The books are superhero romance novels. As a superhero fan, I'm perhaps 1/2 of the audience they're aiming at; I'm certainly not a woman who reads romance novels. Nevertheless, I enjoyed this novel.

I'm not currently keeping up with Marvel's ever-expanding Avengers line, so I'm not sure how the book fits into continuity. In Acosta's story, Jennifer Walters and her alter-ego She-Hulk (annoyingly aka Shulky) have a Jekyll and Hyde relationship with one personality displacing the other rather than the comic book's original version of She-Hulk as a more confident, less uptight and fun-loving version of Jennifer. John Byrne even had She-Hulk practicing law (which is referenced in this novel, but not in a believable fashion). Like Byrne, Acosta has a light humorous hand with the character, and refreshingly doesn't take superheroism too seriously.

As with Hyde, She-Hulk is a released Id and has been tossed out of Avengers Mansion for being too destructive and disruptive. Jennifer, narrating the story via her diary, is living in a borrowed apartment and looking for a new life - a new job, a new apartment and a new boyfriend. Her secret identity as She-Hulk is making all of these objectives difficult.

In coincidences that could only happen in a comic book, or a romance novel, Jennifer gets a job at a law firm that is suing over failing artificial organ transplants, and her former lover Ellis Tesla is the son of the firm;s owner, engaged to its hot-shot lead attorney AND being sued by the firm in the organ case. Tesla is a former musician whose most famous song "Flesh-Eating Bacteria Girl" is about Jennifer, although she continually denies it. Acosta keeps a lot of balls in the air as Jennifer works all of these things out, as well as random attacks by a minor league supervillains, while trying to keep a lid on She-Hulk.

The story is full of lines such as "In order to get Ellis out of my head, which is already crowded by Shulky sprawling all over the place, I decided to participate in something outside my comfort zone" (which is a Game of Thrones party at a bar). After a few minutes of reading, one gets used to them and begins looking forward to the next escapade. This novel won't be for everyone, but if you're a fan of strong female superhero characters, give it a try.

Next up: Tommysaurus Rex by Doug Tennapel
Posted by Mike Rhode at 9:40 PM No comments: Links to this post

Brad's a really nice guy and will gladly sign and talk about his comics work.

Each of Brad Meltzer's five novels has been a New York Times best-seller. He earned credit from Columbia Law School for writing hisfirst book, which became The Tenth Justice (1997), an instant best-seller. His new novel is a thriller, The Book of Fate (Warner Books, 2006). His books have a total of almost 6 million copies in print and have been translated into more than a dozen languages. He is also one of the co-creators of the TV show "Jack and Bobby" and is the No. 1 best-selling author of the critically acclaimed comic book Identity Crisis. He lives in Florida.
Posted by Mike Rhode at 3:50 PM No comments: Links to this post