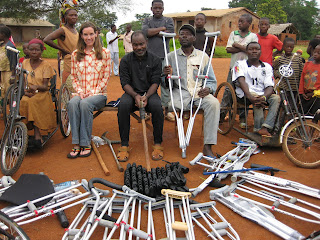 We're not going to go have fun in South Africa.

I hope this message finds you well. On June 25th, we will be taking medical care to a place it's never gone before—the remote, indigenous villages of Tikar country in Cameroon, West Africa.

Soulful Presence and HITIP (Hope International for Tikar People) are partnering to bring Dr. Georges Bwelle, a local Cameroonian surgeon, and his team of 25 medical volunteers to remote, marginalized communities where most people have never even seen a doctor.

By supporting our Mobile Health Clinic, you will help provide critical health services and much-needed medical supplies to children, women, families, individuals with disabilities, and the elderly in the equatorial rainforest.

By donating just $10, you can send an indigenous Tikar villager to the doctor for the first time. Your donation will cover the cost of the doctor's visit and any necessary medication.

Will you please help us? The more donations we receive, the more people we can serve during our trip. You can donate online at http://www.soulfulpresence.org/donate.php or call us at 505.982.1977.

It only takes a few seconds to help us change a life. We deeply appreciate your generosity and your sense of shared humanity!

Catch me in facebook if you can
Issa Nyaphaga - www.hitip.org
"Think Local... Act Global!"
Or inverse these words, it works as well.
nyaphagart@gmail.com is my current email.
Posted by Mike Rhode at 6:03 PM No comments:

Issa's sent me the following press release about his new exhibit:

ARTBREAK GALLERY is proud to present the work of ISSA NYAPHAGA, an international artist/activist who is working on global issues with FREEDIMENSIONAL here in NYC.

ISSA began his career working as a political cartoonist and reporter in a weekly satirical newspaper in his home country of Cameroon, Le Messager Popoli. His opposition to the political regime in Cameroon led him to several trips to jail in 1994 for his publications. In 1996 he escaped from his country to seek asylum in France, where he began collaborating with the famous photographer Jacqueline Hyde, a former assistant to Man Ray.

Being known as an activist devoted to the issues of refugees and immigrants, ISSA NYAPHAGA was invited on June 16, 2001 to20speak before the French National Assembly on the 50th anniversary of the Geneva Convention on the Status of Refugees for the U.N.H.C.R. He also co-founded the organization JAFE (African Journalists in Exile), which defends and protects journalists in danger, and in 1999 he co-authored Comment la France traite l'asile politique (L'Harmattan ed.), a book
that deals with political asylum in France and analyzes the exile experience.

As a way of remaining in contact with his native country ISSA founded the Association "HITIP" (Hope International for Tikar People), which contributes to the development of rural areas in Cameroon, especially in the cultural exchange, health and education sectors.

ISSA NYAPHAGA is currently participating in a three-month residency program in NYC with the HARLEM STUDIO FELLOWSHIP. He is one of many emerging black artists who followed the last presidential election campaign in the US very closely, which then inspired him to produce the body of work in this show.

"As a political cartoonist I was censured and jailed. Today, after 12 years in exile, I seek to examine contemporary society with an expression that transcends the primary function of caricature. For me, drawing cartoons has always been about examining current events in newspapers, and transferring this expression onto a huge canvas or into an installation gives me immense pleasure," explains ISSA.

As part of his 'URBAN WAY' project, on the night of the reception ISSA will be performing on stage with live music.

The show will run from January 4th to February 6th. Issa Nayaphaga sent a note to me today about his exhibit in New York City. He's living part of the time in Mount Ranier outside DC and his work's been exhibited there too. Issa wrote, "In October 2007, I initiated an action to support Ibrahim 17 years old, who is a victim of Polio, in Cameroon.

I'm selling my work in order to buy him a custom designed 3 wheeled bicycle to enable him to get around and lead his life in a productive way.

If some of you can't make it to the reception, please save this postcard and consider sending your check to Joe's Movement.

Thank you for writing "Hope for Ibrahim" on the back of your check.
I'll keep you informed.

Sounds like a good cause, doesn't it? Issa's an expat by the way because his editorial cartoons weren't looked upon with favor by the government.

His New York exhibit's open through the end of the week, he says, "If you didn't have a chance to go yet, you have until this Friday evening March 7th-- I'm taking the show down Saturday morning. Invite your friends!
The show is open 24 Hours, located at:
Hotel Roger Smith, 501 Lexington Avenue - NYC
(cross street 47th East - 2 blocks North from Grand Central)."

Posted by Mike Rhode at 6:20 PM No comments:

Check out this radio show about Issa.
Posted by Mike Rhode at 5:50 PM No comments: