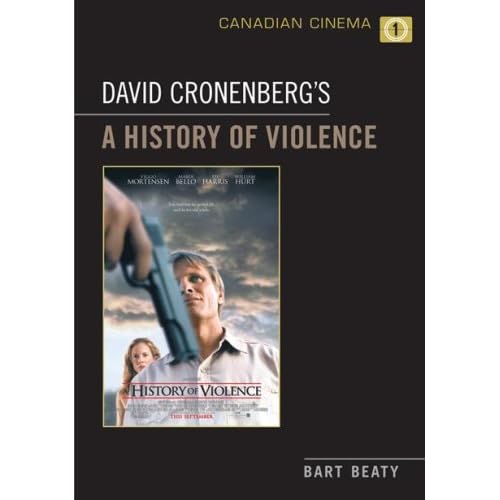 As longtime readers of this know, I have a running list of movies and tv adapted from comics that I publish as a book annually (theoretically at least, as I'm still doing the index to 2008's edition).

A couple of things to note this morning:

My buddy Bart Beaty's new book got an excellent review. The book is David Cronenberg's A History of Violence, By Bart Beaty, University of Toronto Press, 138 pages, $16.95. The review is "Good director, bon directeur," BY PIERS HANDLING, Toronto Globe and Mail Update January 8, 2009. Handling says, among other things, "Beaty does a superb job dissecting, interpreting and unpacking all the key moments of the film, revealing the tools a filmmaker, working at the height of his powers, brings to his canvas."

And then there's the Watchmen movie - "Studios Try to Settle ‘Watchmen’ Dispute," By MICHAEL CIEPLY, New York Times January 10, 2009. Cieply writes, "Mr. Karasik, joined by lawyers for Warner, had asked a court clerk on Friday if the judge would conduct a hearing in chambers, because they planned to discuss what he called “settlement issues.” The clerk conferred with Judge Feess, then returned to say that the judge would insist on a session open to the public." Hahahahaha! Good for the judge.
Posted by Mike Rhode at 10:00 AM No comments:

Fischer on Feldstein on Beaty on Hadju

My buddy Craig Fischer stirred up some old EC and Wertham issues for Al Feldstein and Bart Beaty, both of whom I correspond with, so I'm calling this DC news for the nonce. And it's interesting. Part the first - June 09, 2008 Feldstein on Beaty on Hajdu and part the second - June 11, 2008, Beaty and Feldstein Reply. Craig and I will be seeing Mr. Feldstein at Heroescon next week - the panel that Our Man Thompson is also on, and I'm going to help Big Al stomp Craig down to size... Harrassing an EC editor, indeed. Where's the respect?! Ooooh, my questions for Craig are going to be so tough...
Posted by Mike Rhode at 11:17 PM No comments:

Bart Beaty's written the first of three responses to David Hajdu's 10-Cent Plague. Bart did much of his research for his book on Wertham at the Library of Congress while living off Dupont Circle one summer, and I was able to provide him one article on Psychology of Comics that he hadn't previously seen.
Posted by Mike Rhode at 11:24 PM 1 comment:

More on Wertham by Beaty and Jeet Heer

My friend Bart's got a response to Jeet Heer's review of Hajdu's new book on Wertham and 50s comics censorship and Jeet responds to Bart as well. See "SYMPOSIUM: CULTURE WARS: Comic books were criticized not because they possessed the 'unruly spirit of youth' but because they were emblematic of the worst aspects of a widely disparaged mass culture," Bart Beaty writes," by BART BEATY AND JEET HEER, Globe and Mail March 29, 2008. I'm of two minds about Bart's argument, but I will accept that Wertham was acting as a concerned psychiatrist. Unfortunately the most-well meaning people can do the most damage.
Posted by Mike Rhode at 7:33 PM No comments:

My revisionist Canuck buddy Bart Beaty's book on Fredric Wertham, which you should all own, is cited approvingly in this article "The Horror: Congress investigates the comics," by Louis Menand, New Yorker.com March 31, 2008.
Posted by Mike Rhode at 5:35 PM No comments: