PR: BREATHTAKER gets a MUSIC VIDEO 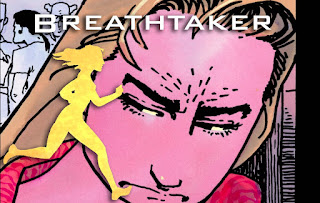 Baltimore, Maryland – Not only does the long-awaited remastered edition of Mark Wheatley and Marc Hempel's acclaimed graphic novel, Breathtaker, finally have a scheduled 2020 release date from Titan Comics, it's accompanied by a brand new comic book, a museum-quality traveling exhibit, and now a music video as well. The video debuts on Diamond Comic Distributors' PreviewsWorld YouTube channel https://www.youtube.com/user/PREVIEWSworld/featured on Thursday, March 12, and goes into wider release after that.

Wheatley and Hempel co-created the ground-breaking graphic novel and many other projects over the years, and as it turns out they're still breaking ground with new ideas associated with Breathtaker. As Titan gears up for the highly anticipated release of the graphic novel and a brand new comic book, the Breathtaker music video has just been released. Not only did Wheatley write and record the music, he also animated the music video.

"I love the possibility the Breathtaker track and music video represent: creatives leveraging technology (and their own talent) to spread their storytelling, in this instance beyond the pages of the original book but with the same impulses.  Cinematic, lush, with tragedy lurking just below the surface, Breathtaker the song is the perfect companion piece to Wheatley and Hempel's visionary approach to Breathtaker the story, as well as a soaring, prog-rock anthem that stands on its own," said Feast of the Seven Fishes writer/director Robert Tinnell, whose own music video experience ranges from directing Paula Abdul's iconic "Straight Up" to rising alt-country singer Charles Wesley Godwin's "Coal Country."

"I have been recording music for longer than Breathtaker has existed," said Wheatley, "In fact I turned down offers from two major recording labels for multi-album contracts to concentrate on creating comics and illustration." Shortly after he began his first monthly comic book series, Mars (also created with Hempel), the demo tapes he had been submitting to the music industry for about five years finally resulted in offers from Capital and Columbia A&R reps.

Listed on page 369 in the March edition of PREVIEWS from Diamond Comic Distributors [item #MAR202123] is the remastered, hardcover Breathtaker collected edition, Breathtaker: Make Way For the Man #138 (with choices of the Marc Hempel cover [MAR202124] or the Michael Avon Oeming cover [MAR202124]), the first new Wheatley-Hempel collaboration in more than two decades.

The Breathtaker music video is a theme song for the graphic novel, running just slightly more than four minutes. Between the visuals, animation and the music, the tune introduces the extreme conflicting emotions that Chase Darrow, the Breathtaker, is faced with during the story of the graphic novel. From the lows of death, loss of love to the highs to be found in the power of new love. And after all, Breathtaker has always been about love, death, sex and power. In many ways, Breathtaker was a pinnacle of  Hempel and Wheatley's earlier original collaborations. With innovative projects like Mars, Jonny Quest, Tarzan, and Blood of the Innocent already behind them, writer-artists Wheatley (Radical Dreamer, EZ Street) and Hempel (The Sandman: The Kindly Ones, Gregory) turned their attention to this project in 1990. They never dreamed they would revisit it and find the spark of new material in it 30 years later.

Their resulting creation, Chase Darrow, was a dynamic woman, sought after by many men, and seemingly lethal to all of them, causing them to age rapidly and die (though to be fair, they died happy). Originally serialized as a four-issue, Prestige format mini-series, Breathtaker became an highly-praised, best-selling trade paperback for DC's Vertigo imprint. And it contained story elements that lent itself perfectly to the new musical effort.

"I had really wanted to agree to release some albums of my music, but I had already signed contracts for monthly comic books. And that takes more than all your time. Over the years since I've worked on a few professional recording gigs, recording soundtracks for TV ads, radio, etc. But most of my music skills have been dedicated to presenting Insight Studios projects," Wheatley said.

Beyond the graphic novel and new comic from Titan, and the music video, Wheatley and Hempel's Insight Studios Group will mount the "Breathtaker Exhibition," which will initially appear at the Norman Rockwell Museum in Stockbridge, Massachusetts and at McDaniel College in Westminster, Maryland. The exhibition explores the creative and physical processes that were undertaken during the original production of the comic Breathtaker in the 1990s, as well as how the work was re-adapted, tweaked and in some cases reworked by the artists during the preparation stages for the Titan Comics re-release.

Mark Wheatley holds the Eisner, Inkpot, Golden Lion, Mucker, Gem and Speakeasy awards and nominations for the Harvey award and the Ignatz award. He is also an inductee to the Overstreet Hall of Fame. His work has often been included in the annual Spectrum selection of fantastic art and has appeared in private gallery shows, The Norman Rockwell Museum, Toledo Museum of Art, Huntington Art Museum, Fitchburg Art Museum, James A. Michener Art Museum and the Library of Congress where several of his originals are in the LoC  permanent  collection. He has designed for Lady Gaga, created set pieces for The Black Eyed Peas, contributed designs for ABC's Beauty and the Beast, and Square Roots, as well as Super Clyde, The Millers and 2 Broke Girls on CBS. Several of his original graphic novels have been optioned for motion pictures with Blood of the Innocent currently in pre-production. His most recent print projects include Songs of Giants, Doctor Cthulittle, Tarzan and the Dark Heart of Time, Swords Against the Moon Men, The Philip Jose Farmer Centennial Collection, Mine! and Wild Stars. Past creations include Return Of The Human, Ez Street, Lone Justice, Mars, Breathtaker, Black Hood, Prince Nightmare, Hammer Of The Gods, Blood Of The Innocent, Frankenstein Mobster, Miles The Monster, Skultar And  Titanic Tales.  His interpretations of established characters such as Tarzan, Dick Tracy, The Green Hornet, The Adventures Of Baron Munchausen, Jonny Quest, Dr. Strange, The Flash, Captain Action, Argus, The Spider, Stargate Atlantis, The Three Stooges, Doctor Who and Torchwood have brought them to life for a new generation of readers. He has written for TV, illustrated books, designed cutting-edge role-playing games, hosted a weekly radio program, and was an early innovator of the on-line daily comic strip form.

In addition to his collaboration with Neil Gaiman on the climactic story arc "The Kindly Ones" in The Sandman, artist and writer Marc Hempel is also known for his critically acclaimed work with Mark Wheatley in the titles Breathtaker, Mars, and Blood of the Innocent. His own creations Gregory and Tug & Buster have been nominated for Harvey and Eisner Awards, and his humor anthology Naked Brain was named Best Comic Book in the Baltimore City Paper. Hempel's art has also appeared in Marvel Fanfare, Epic Illustrated, Heavy Metal, Jonny Quest, Tarzan the Warrior, Clive Barker's Hellraiser, Flinch, My Faith in Frankie, The Dreaming, Lucifer, and Disney Adventures. He has created advertising art for print and television, character design for HBO Animation, CD art for the Nashville band Swamp Rat, drew an episode of the online strip Munden's Bar for ComicMix.com, illustrated a 21-page story for Michael Chabon's The Escapist: Pulse-Pounding Thrills, and has contributed to both MAD magazine and Nickelodeon Magazine. Marc's range of work includes a full-page comic strip for the lavish hardcover, Little Nemo: Dream Another Dream, as well as art for SpongeBob Comics and the Planned Parenthood benefit book, Mine! He is the recipient of the Speakeasy Award and the Inkpot Award. Originally from the Chicago area, Marc currently resides in Baltimore, Maryland.

Founded in 1969 with the help of Norman and Molly Rockwell, Norman Rockwell Museum is dedicated to the enjoyment and study of Rockwell's work and his contributions to society, popular culture, and social commentary. The Museum, which is accredited by the American Association of Museums, is the most popular year-round cultural attraction in the Berkshires. Norman Rockwell Museum is dedicated to education and art appreciation inspired by the legacy of Norman Rockwell. The museum preserves, studies and communicates with a worldwide audience the life, art and spirit of Norman Rockwell and the field of illustration. The museum is a gathering place for reflection, involvement, and discovery through the enjoyment of the artist's work. Norman Rockwell's unique contributions to art and society, popular culture and social commentary influence the museum's programs and interpretations.

McDaniel College, founded in 1867 and nationally recognized as one of 40 "Colleges That Change Lives," is a four-year, independent college of the liberal arts and sciences offering more than 70 undergraduate programs of study, including dual and student-designed majors, plus 25 highly regarded graduate programs. Its personalized, interdisciplinary, global curriculum and student-faculty collaboration develop the unique potential in every student. A diverse, student-centered community of 1,600 undergraduates and 1,400 graduate students, McDaniel offers access to the resources of Baltimore and Washington, D.C., and is the only American college with a European campus in Budapest, Hungary. www.mcdaniel.edu