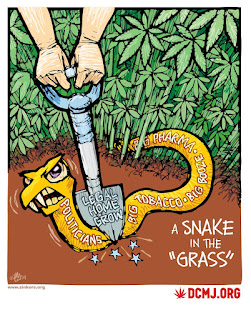 Liberty Cap writes on Twitter on 06.09.19:
"Home grow cannabis is the most important economic factor put upon any
Government regulating cannabis and the industry to keep em honest and
on their toes. Competition promotes excellence and reduces prices,
that the American way. Limited access to market is capitalism gone
wrong."

DCMJ.org weighs in on DC Mayor Bowser's "Safe Cannabis Act" regarding
locally-grown cannabis:
"...DCMJ wants expert growers to be able to sell their excess cannabis
at farmer's markets in the District of Columbia. By providing an
outlet for locally grown cannabis, the DC government can ensure more
dollars are circulated locally and collect sales tax. Moreover, many
growers do not have the capital to invest in a large-scale growing
facility, but can provide the marketplace with unique varieties of
cannabis. Some strains of cannabis are not profitable for large-scale
cultivation, but small home growers can fill the niche if they are
given the opportunity to sell their extra cannabis. There is a fine
line between legal sales and illegal sales and we believe it primarily
involves volume of sales. No one cares if a gardener in DC sells their
extra tomatoes to their next-door neighbor, and we believe the same
case should be made for cannabis. However, if an adult wants to sell
in an established marketplace, we believe they should obtain a
"micro-cultivators license" to ensure they follow the rules. With this
license, the grower would be permitted to transport more cannabis than
regular citizens would be permitted to possess outside of their
homes..."

The current initial draft of the Safe Cannabis Act contains
constraints on the sharing of cannabis and has no provisions for the
legal sale of home-grown cannabis; much of this is due to the
influence of large-scale operations who want to corner the market for
adult-use and medical cannabis.

Most of the gray-market "pop-ups" which became popular in the wake of
Initiative 71 – many of which were busted at some point – aren't
selling DC-grown bud, but product often smuggled in from California
and Oregon, with no way of telling how it was grown, what types of
fertilizers were used, whether or not chemical pesticides were used,
etc. Giving DC local home growers a "Fair Shot" would go a long way
toward eliminating this issue, and keep all that money in DC.

Keep in mind that passage of the Safe Cannabis Act depends on the
passage of the DC budget bill without the notorious Harris Rider,
which prevented DC from taxing and regulating the legal sale of
cannabis. The Rider was written out of the bill thanks to the efforts
of DC Congressional Rep. Eleanor Holmes Norton; the bill passed out of
the House Oversight Committee, but still needs to get through the
Senate and be signed by Mr. T.

Local home-grown cannabis is essential to countering the threat of big
money and "Big Weed". The Plant belongs to the People.