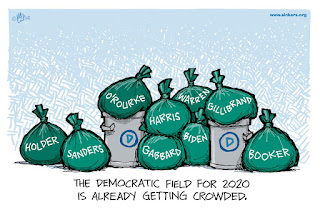 Let's have a look at the lineup, shall we...? We've got a guy who was
Bill Clinton's liar-in-chief, a sk8ter boy who couldn't beat Ted Cruz,
a woman who's proud to have made a career out of prosecuting and
imprisoning the poor and vulnerable, a woman who hangs with fascists
from India, a woman who endorsed Hillary in '16 and brags about being
a capitalist, a guy who pimped Bill Clinton's infamous crime bill in
the '90s, a woman who co-sponsored the anti-BDS bill, a guy whose nose
is so far up Big Pharma's ass it's a wonder he can breathe and – last
but certainly not least – every old progressive's dream date, a guy
who opposes BDS and who sat around silently, not saying jack about the
bare-assed oil-grabbing right-wing coup going down in Venezuela for
over 24 hours before inexplicably parroting Trump's lies about the
Maduro administration.

Fascism is running wild all over, millions are a broken ankle away
from destitution, we're being dragged into another war in Latin
America, the goddamn Earth is on fire, and the Democrats expect us to
shut up and choose from garbage.

Garbage in, garbage out.