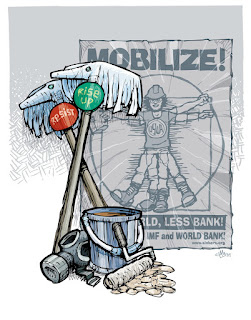 Anarchist cartoonist Mike Flugennock recalls the demonstrations of 16 years ago...

The mood and solidarity between different parts of The Movement — folks like old-skool unionists and environmentalists discovering common goals and realizing they were fighting the same fight against the same enemy — were electric and invigorating in the months following Seattle, and none quite like the personal charge I got when, just a couple of weeks afterwards, I saw the action call posted in alt.activism for the April IMF/World Bank Mobilization in Washington, DC, for April 16, 2000 — the now-legendary "A16″.

At last, the revolution circus was coming to my town, and I was going to actually be in it, and photographing and taping it, and telling the story of that week for everybody else out there -- and the wheatpasting...