Meet a Local Cartoonist: A Chat with Sean Causley 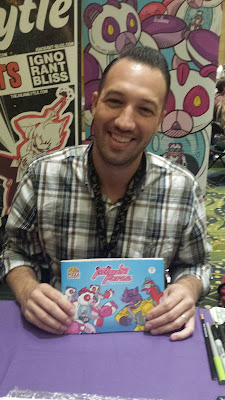 by Mike Rhode
Sean Causley attended SPX this year, and kindly agreed to answer our usual questions about his work.


What type of comic work or cartooning do you do?


My current comic work is my self-published book, Panda Force. It’s about babies from the future that battle evil forces, but they usually just end up destroying everything in their path. There are a lot of one-liners, some potty humor, and a good amount of cute and crude moments. It’s a fun, lighthearted, zany project that gives me a lot of laughs as I work on it. It’s essentially a big love letter to my daughter, Rowan. I have several other projects that I have various roles on, but I do everything on Panda Force, which is nice because it gives me 100% creative control.


It’s evolved into a combination of traditional and digital. I sketch everything on the computer with my Wacom tablet. I then print out the rough sketches on cardstock and traditionally ink the page. Once that’s done, I scan the page and then finish it on the computer. It’s a crazy process, but I still enjoy the tangible, tactile part of creating at least a portion of the art away from the computer.


I was raised in the 80s and 90s — also known as THE greatest decades — in Fort Hunt, Alexandria, VA. I have many fond memories from growing up where I did, so I’m very thankful to my parents and grandparents for that.


Why are you in Washington now?  What neighborhood or area do you live in?


I live out in Chantilly, VA. It’s a great family-friendly area. Super wholesome and what not. Most of my family still lives in the area, so that’s a big reason we’ve stuck around DC. 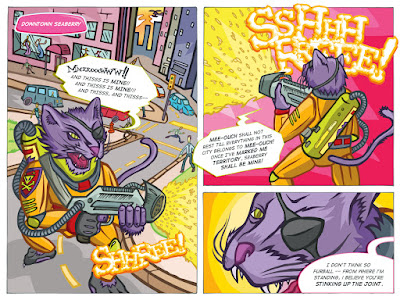 
Fairfax County in my mind is very progressive when it comes to education in the arts. I spent several summers at the Institute for the Arts (IFTA) which opened me up to computer art, airbrushing, character design, all these really obscure ways of creating art which expanded my vision for what art can be. I owe a lot to that program. West Potomac is where I attended high school. Their arts program in the Springbank building was really awesome—and I hear it still is. It was one of the first schools with a dedicated computer lab dedicated solely to creating art. We had a whole bunch of Apple Quadras. Google image search that if you want to truly understand how ancient I am.


This isn’t education or training related, but the Pearl Arts and Crafts store that used to be on Telegraph Road was an amazing place to me when I was a kid. You could get everything under the sun there, and the tools you use are just as important (if not more) than any training you can ever receive, since so much of creating art is based on experimentation. 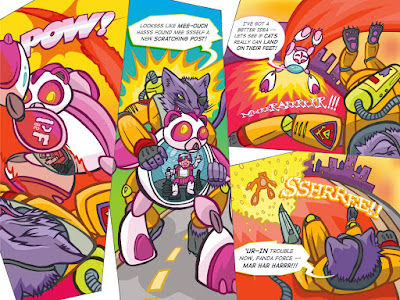 I studied graphic design and illustration at the Savannah College of Art and Design. That was a great experience, as well. It’s almost intimidating how many amazing artists come in and out of that place. Being surrounded by all that creativity was inspiring and motivating.


I’ve always loved surreal art, and there are a variety of artists and creators that I’ve admired from afar, but none that I feel like I’ve tried to draw inspiration from. So in that sense, I don’t know if I have any real artistic influences. My main source of inspiration is family, friends and everyday life occurrences and experiences. Oh, and pizza. Definitely pizza. I’m more creative on a full stomach.


If you could, what in your career would you do-over or change?


Nothing. No regrets! I try to keep the mindset of, “what awesome things can I create today and tomorrow” as opposed to dwelling on things I could’ve done differently in the past.


I did a good amount of tour and gig posters in the late 90s and early 2000s for the band 311 and a bunch of other random groups. I’m also the Creative Director for ROIAdvertising, so you can find a lot of my graphic design work online. My tumblr site that I curate with Julian Lytle called Long Boxes on 22s has a solid group of followers and fans. It’s a blog where we mash-up comics with pop and hip hop culture. I guess that is more what I’m “known for”, at least according to Google. Now that I’m getting Panda Force out there and some of the other books that I have lined-up, I’m hoping I can become better known for my visual storytelling. 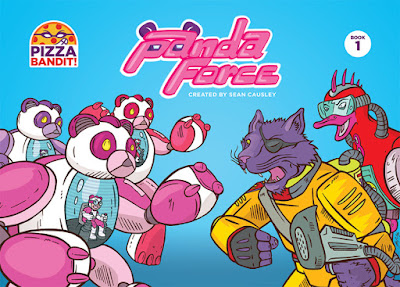 
Anything that I am currently working on. Like most artists, I’m horrified of any art that I’ve created that is over a couple weeks/months old.


I’m about 75% of the way done with Panda Force, so I’m kind of excited about the “unknown” after that. I’ve got a bunch of ideas swirling around in my head of things I’d like to create, but right now I’m very focused on completing this first series before I get ahead of myself. 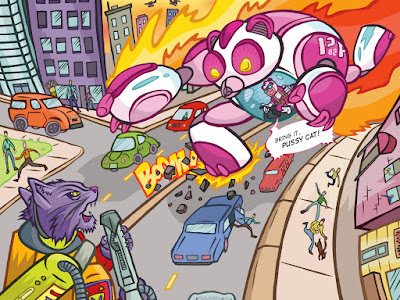 
I think the future will be the acceptance that both digital and traditional forms of media, and creating things can coexist together. That one is not going to completely take over the other, as we like to try and predict.


I also feel the future will be more focused on quality over quantity. I think right now that we as creators are too focused on producing as much content as possible, as opposed to focusing on the quality of the craft.


I just got into the whole convention rigmarole this year. The local ones I’ve done are Awesome Con, Baltimore Comic Con, and SPX.


I have to say, it’s been a lot of fun. I really enjoy meeting new people, and seeing them excited about Panda Force. I have to send a special thanks to Julian Lytle, Shawn Pryor, Ronald Wimberly, and Carolyn Belefski for their guidance and support with the conventions and comic book business. An extra special thanks goes to my wife, Tracy who’s the one to actually get me off my posterior to put my art out into the world and not leave it in a closet gathering dust. High fives, all around. 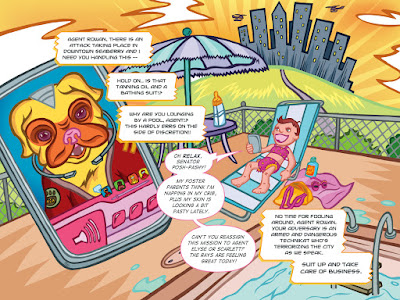 
It has a little bit of everything for everybody. You also get all the seasonal changes. In comparison to most places, it’s pretty diverse and progressive.


I usually just direct people to the National Mall and say “peace be with you”, but if I had my own choice it would be a toss up between the Hirshhorn — or my own personal favorite — the National Museum of Natural History. They have dinosaur bones, the Hope Diamond and an insect zoo. I mean, how rad is that?

Minerva in Chantilly is our go-to if we want some good Indian cuisine. My family can put away some wings, so we hit up Buffalo Wing Factory pretty frequently. When we do it up big, we go to Tuscarora Mill out in Leesburg. I also can’t forget the Silver Diner. I’m a complete sucker for a burger and shake.

I’m on Twitter at @causleyconcepts. That is probably the best way to follow everything I create. If you’re a hip hop head, you can check out Longboxes on 22s at longboxeson22s.tumblr.com. You can buy book one of Panda Force at pizza-bandit.com.