Dana Jeri Maier's comics provide useful advice, philosophical musings and spot-on witticisms. She shows us ourselves, not unkindly, as silly and vain and self-involved. Her cartoons feel very interior, a mind watching the world and muttering to itself. They're what that person standing by themselves at the party, not talking to anyone, pretending to look vaguely interested in nothing in particular, has been secretly thinking the whole time.

Dana Jeri Maier is an artist and cartoonist living in Washington, DC. She has exhibited widely throughout the DC Metro area and various street corners, if you know where to look. Maier's site-specific mural, Inscrutable Comic, is on permanent display at the Flashpoint Gallery in Washington, DC.

Read The Worried Well at http://gocomics.com/the-worried-well.

A Washington, DC cartoonist who hasn't been featured here? Bad form! I reached out to her to ask her to answer our standard questions.

I try to straddle the line between cartoon and fine art. Some of my comics are observation-type humor, some are more philosophical.


Pen and ink and watercolor, and occasionally gauche. I try to use the computer as little as possible—coloring on the computer is just too soul-sucking for me. My favorite tools are Microns with slightly-broken nibs (so you get a nice variation in line), and portable Japanese brush pens.


I was born in the early 80s in Arlington, Virginia. My family moved to Falls Church when I was four, and I grew up there. 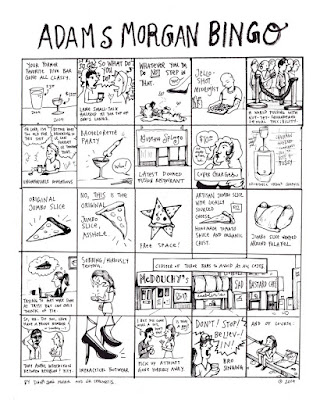 
I live in Columbia Heights. I'm here because I haven't found a good enough reason to leave the area—I went to art school in Baltimore, then lived in England for half a year, and wound up back in DC. The Type-A-yet-small-town-ish nature of the city appeals to me.

I went to art school and studied illustration. I dabbled in cartoons while I was there, and did some animation work in grad school, but put cartoons on the back-burner until a few years ago.

Saul Steinberg has had a significant impact on me as an adult. When I was a kid I checked the Shel Silverstein poetry books out of the school library so often that the librarian gently reminded me that maybe there were other books I might like to give a chance? (Looking back I can see she meant well, but I remember being deeply insulted at the time.) As a teenager I grew up reading Richard's Poor Almanac and Cul De Sac in the Washington Post, so I'm happy Richard Thompson is finally getting more recognition as a brilliant artist. And my parents always had copies of Esquire magazine lying around the house, which is where I read cartoons by Daniel Clowes for the first time, believe it or not. Not that his work has a lot in common with mine; it just showed me what kind of storytelling comics were capable of, in a way that I'd never seen before. I also love the work of a bunch of women cartoonists: Lisa Hanawalt, Emily Flake, Eleanor Davis, and Lilli Carre are some of my favorites.


I regret not taking more sculpture classes when I was an art student—it would be nice to know how to use power tools and be more confident working 3D. And I should've taken cartooning more seriously early on. I didn't do it as much because it was so much harder than fine art, where I felt like I had more freedom for my work not to make any sense. Cartoons can't really get away with being inscrutable the way fine art can.


Probably my wheat pastes of mice in cups, and the Indifferent Guy.


I have a series of ink drawings I did a few years ago that I always look at and think, "man, I would like to do something like that again." I think my mural at the Flashpoint gallery came out pretty well, too. But it's hard to look at my old work and not just see mistakes or things I'd do differently. 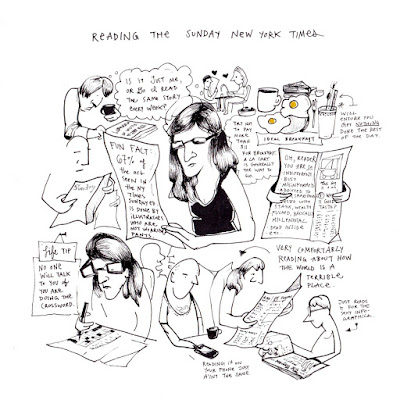 
I'd like to do a comic essay, or create cartoons that are more writing-heavy than what I've been doing. I feel as though I could use the practice. Cartoons are sneaky in that the writing is a thousand times more important than the drawing; a cartoon with shitty drawings and great writing can still be a joy to read, but a cartoon with great drawing and bad writing will always be terrible no matter what.


Worst-case scenario I will go down a rabbit hole of Facebook and think pieces. Best case scenario, I'll read, or study the work of other artists I like. I have a pad of lined yellow Post-It Notes that has been particularly good for doodles. Or I try to work on something fun or brainless.


I'm not sure. I can't really speak to the industry side of things, but I've been thinking a lot about the effect of social media on art, and how we use it as a barometer of what "good" is. That is, if I draw something and post it online and no one likes I will feel bad, and wonder what's wrong with the drawing. And I hate that this is a phenomenon in my life now, but I'm guessing it's true for a lot of artists. On the flip side of things, artists who are well-known have to deal with immediately opening themselves up to a barrage of online comments and criticism, which can make you cautious with your work (or at the very least, ruin your day). So maybe you really can't win. 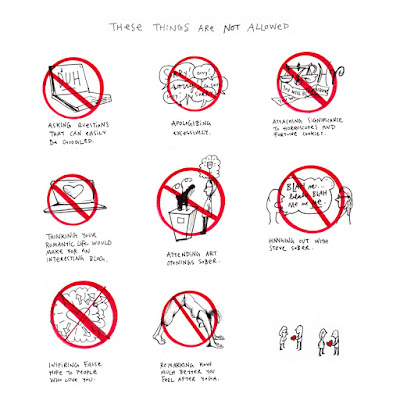 
I tabled at the Small Press Expo for the first time last year. It was terrifying, but it was also where an acquisitions editor from GoComics found me and signed me up, which is probably a best-case scenario for tabling at a convention. I'd like to table at more of them, now that I know what to expect.


There's a moldy stereotype of DC being a stuffy town with a bunch of power-hungry wonks, but I've never found that to be true. For me at least, it's like a high school cafeteria where I can sit at whatever table I feel like—it's easy to meet a variety of good-natured, intelligent people here. And I appreciate that it's small and well-organized. I hate driving, so any city that requires a car is a deal breaker for me.

Everything here seems about 30% more expensive than it should be.


My favorite art museum is the American Visionary Art Museum in Baltimore. I don't think museum-going gets much more fun than that.  In DC proper I like taking people to The Portrait Gallery / American Art Museum. The Kogod Courtyard is also a great place to draw if I need a change of scenery.


I like the Red Hen in Bloomingdale for special occasions. The happy hour at Eat the Rich is pretty sweet, too.