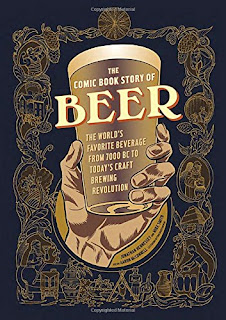 A guest review by Chris Ingram

The Comic Book Story of Beer: The World's Favorite Beverage from 7000 BC to Today's Craft Brewing Revolution, by Jonathan Hennesey and Mike Smith, and illustrated by Aaron McConnell (Ten Speed Press 2015, $19), is a 174-page volume that tells the story of ‘the world’s favorite beverage.’ This non-fiction 'graphic novel' covers a broad sweep, ranging from what is known about the history of beer in the ancient world to the craft beer explosion of the early 21st century.


The book opens and closes with a few pages of framing telling the story of a typical guy making a beer run for a get-together, and his bewilderment at the many different styles of beer that are available today. An encounter with a friendly (and very knowledgeable about beer!) store clerk provides the jumping-off point for the history of beer.

The book is split into eight chapters, but I would split it into three parts: a brief history of brewing in the ancient world (roughly from prehistory to the era of the Roman Empire), a short but thorough description of the brewing process, and a longer section which covers the history of beer brewing and consumption from the Dark Ages to the present.

McConnell’s illustrations are well suited to the demands of this book, varying interestingly in style from chapter to chapter, although not so much as to be jarring. Some scenes are drawn in a realistic, open style, such as those in the modern day setting or recent history, while scenes from antiquity or medieval periods seem to have thicker lines and an overall darker palette.

Interspersed with the chapters of the book are page-sized “Meet The Beer” illustrations, each covering a different popular style of beer (Lambic, Bock, Pilsner, etc.). These combine a handsome illustration showing that type of beer and placing it on three different scales - corresponding to color, bitterness, and alcoholic strength - together with a few paragraphs of text describing the history of that style. Examples of that beer style are also named in the illustration, which provides a reference for less beer-savvy readers.

The authors discuss the ancient origins of beer recounting particular examples that are known from documentary and archaeological sources ranging from Scotland to Sumeria to ancient China. A more speculative theory - the ‘beer theory’ of agriculture - is also presented.  The gist of this theory is the idea that the back-breaking labor of early agriculture was motivated in part or in whole by the desire to obtain a steady source of grain - in order to brew beer! Regardless of whether that theory is true, many examples of beer or beer-like beverages from the ancient world are included (some of which have had modern reinterpretations, such as Chateau Jihau by Dogfish Head Brewery).

The brewing process is presented in some detail, with cartoonish illustrations that help to offset the technical complexity of the topic. As a layperson who knows far more about consuming beer than brewing it, I found this chapter especially illuminating.


The balance of the book covers the history of beer from the Dark Ages up to the present. Episodes in the history of beer are presented as short vignettes that do a good job of setting the broader historical context. The shift in beer production from literally a cottage industry to mass production (and the concurrent shutting out of women, the traditional brewers of beer in the home), the discovery of yeast and the effects of the scientific revolutions of the 18th and 19th centuries on brewing are all presented in an engaging way. Finally, the book concludes with a chapter on the origins of today’s vigorous craft beer scene, both in the US and Europe (driven primarily by the UK, but also informed by brewing traditions in Belgium and elsewhere). As someone who has benefited from that craft beer revolution personally, I gained a new appreciation for the origins of beer from this book.

The authors will be appearing in the area this week. 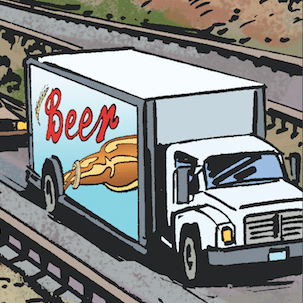