Rebecca Goldfield is a local documentary film producer who recently has ventured into the world of graphic novels and comics to tell her stories. This week, her first graphic novel, Captive of Friendly Cove: Based on the Secret Journal of John Jewitt (Fulcrum Publishing) its bookstores. A summary of the story: After his ship is burned and his shipmates killed, British sailor John Jewitt lived for nearly three years as a captive of the Mowachaht people, a Native American tribe on the west coast of Vancouver Island. During his captivity, Jewitt kept journals of his experiences and of tribal life. Follow his adventures as he plies his skills as a blacksmith, saves the life of his only remaining crew member, and comes up with a strategy to free them both. 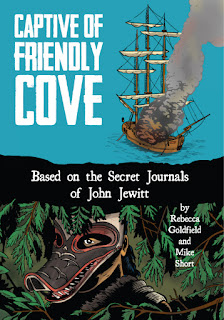 Later this month, Goldfield will be signing at the Small Press Expo in Rockville, Md.

How did you come up this story? What was it that grabbed your interest?

I was living in Vancouver BC and was in Horseshoe Bay one day, when I discovered this whacky little shop--a combination post office-candy counter-bookstore. I was soon poking through a creaky rotating rack that displayed just a handful of books--and one turned out to be John Jewitt’s journals. I thought it was a great story; a sympathetic young protagonist sets out alone to make his way in the world and suddenly finds himself caught up in an historical conflict he had no idea existed. His personal story was that he was injured in a bloody massacre aboard his ship and then spent several years having to survive both physically and mentally in the wilderness, as a slave in a culture that was utterly alien to him. But the larger story is the conflict between the native world and the explorers and traders of the time and that gave it another whole dimension.

Of all the ways to tell this story—a prose short story, article, documentary, etc.—why did you decide to make it a graphic novel? 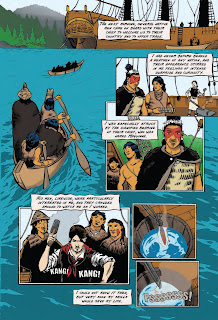 Part of it was a matter of my own background, having produced and written TV documentaries for so long, it just felt natural to choose another visual medium. But as I read the source material I found a great adventure story that was a bit buried in descriptions of daily life, of rituals, of hunting techniques, of migratory patterns. I thought the art could very effectively depict those elements as well as action sequences, and even emotion, while I as a writer could focus more on building the characters and structuring plot and creating dialogue and narration.

You previously wrote a short story for the comics anthology District Comics, but this is your first longer comics project. What were your impressions about the process, from researching and writing, to collaborating with the artists?

I had absolutely no idea of the scope of what I was undertaking. I went from having never created a single panel to committing to a full length graphic novel and the learning curve was about as steep as they come. I was used to writing for film but despite the similarities, I soon learned that producing a graphic novel is its own art form, one that plays out in space, not time, as film does. And structuring a story that took place over several years, a number of locations, different seasons, many characters, all taking place in an environment and culture that was new to me--it was a lot to figure out. My wonderful artists were incredibly generous about letting me, a novice, take the lead--teaching me as we went--because I had a lot to learn.  I’m sure they rolled their eyes often.

This is a historical graphic novel. What was the hardest part of researching it? Did you reach out to any of the descendants of the people in the story? 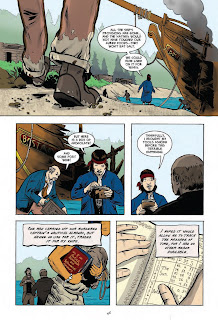 Research is always the most pleasurable part of any project for me, and I could not have been happier reading every book I could find on the contact period in the Pacific Northwest, and speaking with historians, anthropologists and museum curators. The hard part was connecting with the Mowachaht people themselves---it took a very long time for anyone to really talk to me. After all, they’d been living very successfully in the area for thousands of years, John was there for under three and so was not even a footnote to a footnote in their history. Ultimately, though, I did spend a wonderful day in Yuquot (Friendly Cove) and found the people to be extraordinarily open and willing to share their collective memories of John and contribute their perspectives. And though the story is told through our protagonist’s point of view, I did get some of that in.

Who is the target audience for this book? Do you envision it being used in classrooms?

It is targeted to middle school students and older, and yes, the hope is that it will be used in schools and libraries. It’s a great, true adventure story, with memorable characters and a dramatic historical conflict. I think it will appeal to young adults and not so young adults as well. Hope so, anyway!
Posted by Matt Dembicki at 3:20 PM