Dembicki at ALA this weekend

I'll be at the annual American Library Association convention this weekend in Chicago. I'll have a table in Artist Alley (booth 2356), along with free promo posters for the comics anthology Wild Ocean, due out in spring 2014 from Fulcrum Publishing. Plus, the original art for the promotional poster (below) will be in a silent auction as an ALA scholarship fundraiser!

I'll also be a one-man panel to talk about District Comics and what's coming down the pike for the project!

Other comics-related events at ALA: Rep. John Lewis (D-Ga.) will be one of the featured speakers, promoting the first book of his three-volume graphic novel March (Top Shelf Productions).
There's also a slew of events centered around comics all weekend, with panels featuring Gail Simone, Paul Pope and Jeffrey Brown, among others. 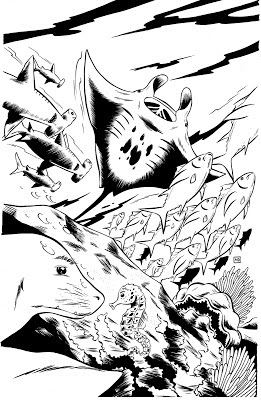 Posted by Matt Dembicki at 1:08 PM