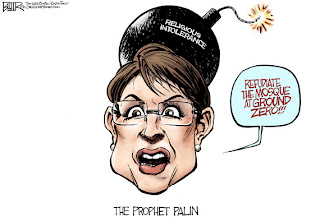 I did not expect such an expression of treason-like appeasement in your newspaper. According to this cartoon, we should agree to erect a monument for murderers in the place of their crime at our own home.

Why not build an O.J. Simpson statue in the front yard of Nicole Simpson's house, or a statue of Timothy McVeigh in Oklahoma City? Or Hitler's statue in Auschwitz?

It is not Sarah Palin who is a "religious intolerance bomb," but those Islamic jihadists who murdered Americans by the thousands. Now they want to have their temple at the scene of the crime as a symbol of their coming conquest and rule. It's horrific.